What exactly did she say? 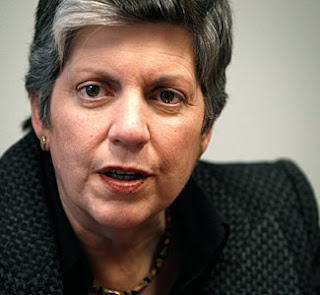 UC prez Napolitano has an op ed in the Boston Globe. The headline - which maybe she didn't write - seems like it is going to be a libertarian style anything-goes-except-fire-in-the-theater (when there isn't a fire). And, indeed, the opening paragraph starts out with a fire-type message.

It then says that in the 1960s, anything goes was the approach. Now, however, she says, things are changing demographically. (But it is not clear how that figures into it.)

She says you shouldn't shout down speakers or prevent them from speaking. But she says she prefers a campus which is "loud" (which seems to endorse aggressive heckling).

It's fine to say things are not absolute. But the op ed seems to be a very lengthy way of saying that and seems to wander from one view to the next. We'll be fair and balanced, however, and let you read it for yourself:
----