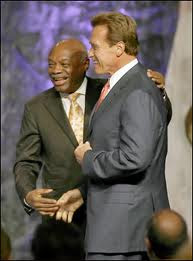 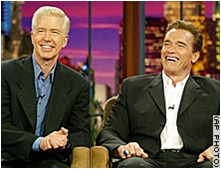 From http://www.capitolweekly.net/article.php?xid=z2hom7ay9rt20f# The call for pension reform received an unexpected boost from an unlikely source this week -- former Gov. Gray Davis. In an interview with Reuters, Davis said reforms advocated by Gov. Arnold Schwarzenegger will make it easier for whomever holds the job next, and he praised Schwarzenegger for pushing for changes in the state pension system -- changes that Davis said were now inevitable.

Of course, Davis is the one who is often blamed for boosting state worker pay and increasing pension benefits. The Schwarzenegger administration, led by David Crane, points to a measure signed by Davis in 1999 – SB 400 – is blamed for part of the current mess. ...

In the past, former Assembly leader and San Francisco Mayor Willie Brown has also endorsed the governor on public pensions.

What all these endorsements from Democrats mean is that momentum is building for something to happen on pensions - and, as I have previously posted (ad nauseum some would say), UC needs to have a plan in place soon to avoid being swept into some kind of statewide reform.

PS: It goes without saying that on the political spectrum on the right, virtually any pension is now a scam: http://totalbuzz.ocregister.com/2010/08/17/sidhu-pledges-to-be-pension-free/39319/

UPDATE: And now Democrats attack Republicans for having pensions http://blogs.sacbee.com/capitolalertlatest/2010/08/bera-takes-aim-at-lungrens-pen.html