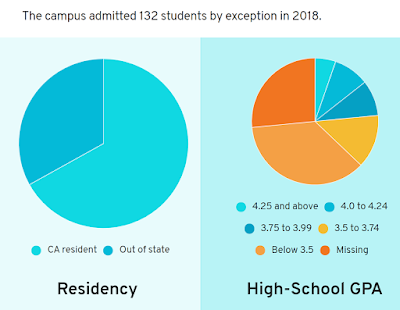 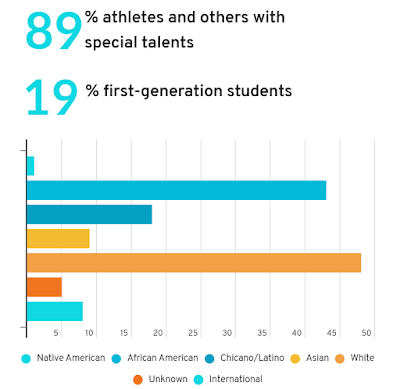 ...At highly-selective UCLA, most of the 132 students admitted by exception in 2018 came from California, according to documents obtained under CalMatters’ public records request. All but about a dozen were athletes or possessed other special talents.

While athletes made up the bulk of that group, UCLA spokesperson Ricardo Vazquez said it also included applicants with skills in music and art. More than a third had grade point averages below 3.5, well under the 4.25 median GPA for all admitted freshmen that year. The GPAs of another quarter of admits are listed as “missing.”

"Extraordinary talent of any sort, athletic or otherwise, can limit a student’s ability to meet eligibility requirements because of the time commitments some of those activities may involve,” Vazquez wrote in a statement to CalMatters.

UCLA has long used admission by exception for athletic recruitment. Its officials told the NCAA in a 2011 report that about half of all student-athletes were admitted via the policy—including 85 percent of football players on scholarship—compared with fewer than two percent of incoming freshmen overall...

Full story at https://calmatters.org/education/higher-education/2019/08/college-scandal-admission-exception-uc-california-side-door-sports-money-diversity-secrecy/
Posted by California Policy Issues at 8:52 AM