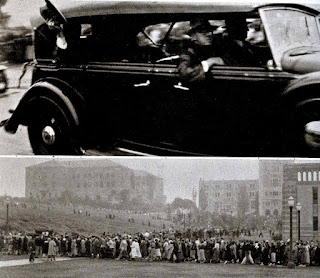 The photo on the left appeared on the Facebook page, "You know you grew up in West Los Angeles if you remember..."

It purports to show a brief visit in 1936 by President Roosevelt to UCLA. The upper panel is said to show Roosevelt's hand waiving his hat.

The lower panel is said to show students returning to class after the visit.

A quick search of LA Public Library photos shows Roosevelt visiting LA in 1938, so the 1936 date may be wrong. See below. The car looks similar except the top is down in the 1938 photo. And Roosevelt is waiving his hat: 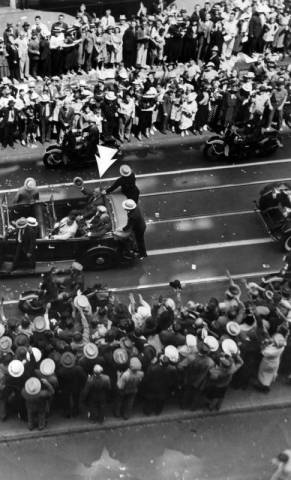 If anyone wants to do further research and clear up the date, please do so.
Posted by California Policy Issues at 8:10 AM