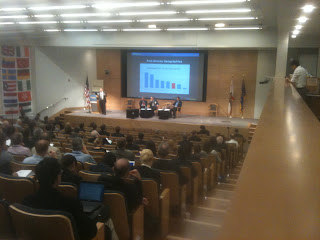 The headline may seem odd.  Conferences are held on campus all the time.  Maybe the headline should instead be "Quarterly UCLA Anderson Forecast Conference held at UCLA without construction of a new campus hotel."  Despite the notion that without building a hotel-conference center, UCLA won't be able to disseminate its research, such dissemination happens on campus regularly as the photo shows.

As for the Forecast, here is a summary:

In its fourth and final quarterly report of 2012, the UCLA Anderson Forecast’s outlook for the United States says that Gross Domestic Product (GDP) will grow at less than a 2% annual rate through mid- 2013. After that, the forecast expects growth to pick up and exceed 3% for most of 2014 with housing activity leading the way. Unemployment will stay close to the current 7.9% rate in 2013, but gradually decline to 7.2% by the end of 2014. By the end of the forecast period, inflation is expected to be above the Fed’s 2% target, bringing to an end the zero interest rate policy that has been in place since late 2008.  In California, though the passage of Proposition 30 by California voters creates some risk and has some impact on the forecast, the outlook for 2013 and 2014 is not much different than the previously released September forecast, with numbers marginally lowered for 2013 and 2014 still seen as a year that California’s growth rate exceeds the nation’s...

Full story from the official release at http://www.anderson.ucla.edu/x46141.xml.
Posted by California Policy Issues at 5:10 PM