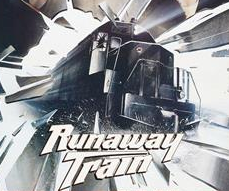 We have been blogging from time to time about the runaway train heading for retiree health care privatization. Rumors - that's all we have - suggest that the RFP process is well underway and that within a week or so information from that process will be heading for Napolitano who may make a decision as early as the end of June. Whether that information will even be conveyed to the Regents in July is unknown. The UCLA Emeriti Association did inform the Regents' Health Services Committee on June 11 about the impending change, and requested they look into it:

Another unknown is how UC will meet its obligation to bargain over the change in retiree health with affected unions before open enrollment in November and January 1 implementation. Insurance is a mandatory subject of bargaining under state law. If unions choose to raise the issue - we don't know if they will, but they are aware of what is happening - UC could only impose the change after reaching a legitimate impasse in bargaining. It could in principle impose the change only on employees not represented by a union, but that would change the pool of employees and the RFP.

It is important to point out that the university admits it doesn't know where the supposed $40 million in saving. Specifically, it has no information on the key issue of denial of services. From the UCOP document we previously reproduced:

One difference is that in traditional Medicare, the Medicare program makes decisions about whether a service is ‘medically necessary,’ which is not universally defined. Under an MA PPO plan, the insurer offering the plan makes those decisions. High-quality evidence does not currently exist concerning how, if at all, medical necessity decisions differ between traditional Medicare and MA PPOs. [Underline added.]

A UCOP official back in late April admitted to a joint CUCEA-CUCRA meeting that how the carriers could offer a $40 million saving if UC privatized its retiree health insurance is unknown, because what the carriers do is "proprietary." The assumption that they would get the saving by collecting more from Medicare is just that, an assumption, because the carriers don't disclose what they do. You can hear his response to questions at the link below: