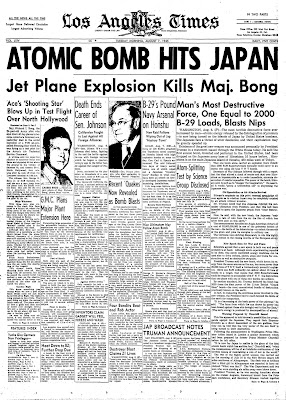 Today is the 70th anniversary of the Hiroshima atomic bomb. The Manhattan Project which developed the bomb was co-directed by Prof. J. Robert Oppenheimer of UC-Berkeley’s physics department.

In 1980, BBC produced a seven-part series about the Project, Oppenheimer, and goings on at the time at Berkeley. You can now see the whole series on YouTube. Highly recommended by yours truly.

The Manhattan Project and its connection to Berkeley are the reasons UC remains involved in the Dept. of Energy labs. This blog post is essentially a repeat of one that appeared on July 16 on the 70th anniversary of the testing of the first bomb in New Mexico.

As a side note, the front page of the LA Times shown above also contains an obituary for California U.S. Senator Hiram Johnson who, as governor in 1911, brought California "direct democracy" - the initiative, referendum, and recall - along with women's suffrage and workers' compensation insurance.

Part 1 of the BBC series: