We have been following the Requa case from time to time. Most recently in early June, we noted the case was advancing in court.* The case involves certain Lawrence Livermore National Lab (LLNL) workers who didn't get what they thought were promised retiree health care when the lab went to a new management system. Indirectly, the case might have challenged the official position of UC that retiree health care is just a nice thing the university provides voluntarily, but that it is not a legal obligation (unlike the pension plan).

We now have word that the case has been settled before trial. However, any settlement has to be approved by the Regents. And the Regents don't meet again until September. So, whatever may be in the settlement won't be known until then.

One suspects, however, that such an out-of-court settlement involves paying off the plaintiffs. There may be no resolution of the issue as to whether retiree health is a legal obligation.

Below are some document with regard to the settlement: 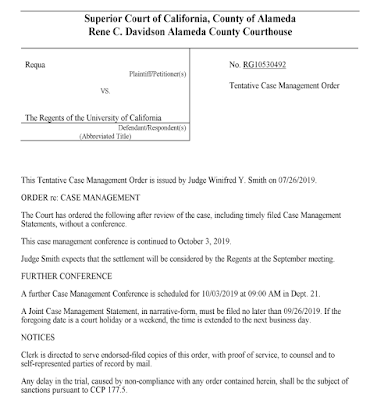