Today's Lesson: Why you should worry about the legislature's one-time allocation to the UC pension 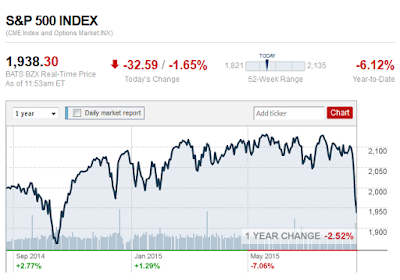 Here is a chart of the S&P 500 stock market index showing the drop today as of about 8:55 am PDT. Do I know what the chart will look like at the end of the day? Next week? Next year? Do you? Does anyone, really? Even the facile news coverage - China problems so everyone was selling!!! - isn't going to tell you much.  (Have you ever stopped to think that every stock sold is a stock bought? It takes two to tango and two to make a sale, a seller and a buyer. So you could just as well say everyone was buying!!!)

In exchange for messing up the UC pension system big time, there was supposed to be a multi-year deal about pension contributions between the UC prez and the governor in the Committee of Two. But the legislature allocated only a one-time/one-year contribution with the explicit proviso that it was promising no more. Now the official line at UCOP and the Regents is not to look at what the legislature said and instead take the governor's word as an ironclad contract even though the legislature enacts budgets, not the governor. But even if we do have some kind of "understanding" with the governor as of now, what happens if the economy and stock market don't go as expected over the next year? What if revenues for the state don't arrive as expected? Revenues are very sensitive to perturbations of the stock market. The last governor had a "compact" with UC that evaporated when hoped-for revenues didn't appear.
Posted by California Policy Issues at 9:31 AM