Can We Have a Room With an (Alternative) View at the Hotel Dispute? 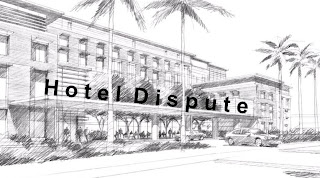 An article by Erica Perez appears today in the online California Watch news service on the proposed UCLA hotel/conference center that is up for consideration by the Regents next week.  Excerpts:

The Luskin Center relies in the first year on a cushion of surplus revenue from the UCLA Lake Arrowhead Conference Center and the UCLA Guest House – both of which run healthy surpluses. …

…"It’s disingenuous in the sense that this is a project that's supposed to take care of itself," said Daniel J.B. Mitchell, professor emeritus at the UCLA Anderson School of Management and School of Public Affairs, who has written about conference center developments on the UCLA Faculty Association blog.

Steven A. Olsen, UCLA vice chancellor of finance, budget and capital programs, said having the three facilities work together as one business unit actually strengthens their financial security overall. "This is like all of our other auxiliary enterprises. We pull together business plans, we do due diligence and we have very conservative projections on demand," he said. "We feel this will be an ongoing concern."  (Note from Yours Truly: We can agree on that!  We will indeed be concerned on an ongoing basis!  More seriously, an earlier post on this blog outlined a revised, scaled-down plan that would be less risky and address another campus issue – the future viability of the Faculty Center.  See http://uclafacultyassociation.blogspot.com/2012/03/there-could-be-grand-bargain-on.html for details.)

"There is a risk that maybe the occupancy won't be what you think, or it's going to turn out to be more costly to operate this than you expect, and then this thing becomes a drain, and in some way or another, something has to be taxed," Mitchell said.

Local hotel owners also are concerned. Unlike privately owned hotels, the university conference center would be exempt from transient occupancy, property and parking taxes. In a December 2011 letter, Bob Amano, executive director of the Hotel Association of Los Angeles, said the Luskin Center would pose unfair competition.  "The hotels aren't against building new hotels, it's just the playing field they are proposing to operate this hotel," Amano said in an interview…

Laura Lake, co-president of the community business alliance Save Westwood Village, said her organization would rather see a stand-alone conference center without a hotel. "The key question with this hotel is, is there really the demand for bona fide academic meetings? Or is this going to be party central for alumni, parents and Bruin sports fans?" Lake said. …

You can read the full report at http://californiawatch.org/dailyreport/questions-linger-regents-consider-ucla-conference-center-plan-15448

The question is whether at the upcoming Regents meeting the proposed hotel discussion will have room for an alternative view. Or will the argument have to be carried out elsewhere?


Update: Michael Meranze spotted the California Watch article in the Huffington Post.  It's hard to imagine the Regents are not aware of this matter.  An earlier post on this blog noted a related recent article on the hotel in the LA Business Journal. 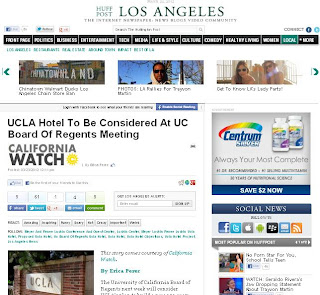