More on state budget and UC 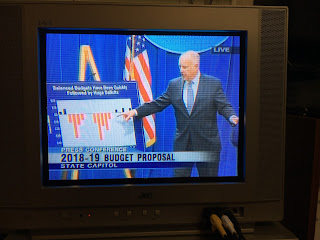 We noted yesterday that the governor proposed in his 2018-19 budget to give UC an additional 2.1% compared to the current year. (He records it as 3% because some of the current year money was designated as "one time.") However - and this point was made at the governor's news conference - through December, the state's revenue is running $3.8 billion ahead of projections made when the 2017-18 budget was passed.* So it appears to be flush with cash at the moment, which could add to legislative appetites for spending beyond the governor's proposal.

A statement from UC holds out prospects for an increase beyond what the governor proposed. Email from "UC advocacy":

Yesterday, Governor Brown introduced his 2018/19 state budget and we are pleased that it provides a funding increase to our core educational budget. This 3 percent increase, however, falls short of the 4 percent growth that UC had anticipated under the agreement we had established with the governor.

We hope to continue conversations with the governor and the legislature to ensure funding for expanded access to UC and to maintain adequate support for our mission of teaching, research, and public service.

Over the next several months, we will keep you apprised of ongoing budget conversations and opportunities to help us advocate for the university.

Thank you for your continued commitment to UC.

Note that a lot of the extra cash received by the state came in during the month of December. Tax accountants were telling clients who were likely to be hit by the $10,000 cap on state and local tax deductions to pre-pay the fourth installment of estimated state income tax in December instead of January. So the extra cash may be a one-time event for 2017-18 that won't repeat in future years. No one knows for sure.

The governor prefers to put extra cash into his rainy day fund and argues that a recession will inevitably come and cause a budget crisis. In his news conference, he emphasized that the duration of the recovery from the Great Recession has been especially long with the implication that it would likely soon end in his successor's term of office: