UCLA History: Pauley Pavilion (and a report of a bomb threat yesterday) 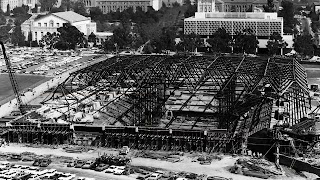 The photo shows the original Pauley Pavilion under construction in 1964.  It opened in 1965. The Daily Bruin yesterday evening posted a short article at about a bomb threat that closed Pauley Pavilion and other buildings in the area for a time.  Nothing was found.  See http://dailybruin.com/2013/08/03/pauley-pavilion-wooden-center-evacuated-reopened-following-bomb-threat-investigation/

Pauley Pavilion was substantially reconstructed and reopened in November 2012.  A promotional video released for the reopening is below:

Pauley Pavilion Through the Years 1965-2012 from Ariana Berlin on Vimeo.

The video has some historical photos of the origins and original construction.  It omits reference to the fact that H.R. Haldeman of later Watergate fame led the fundraising effort.  He is shown below holding a check as part of that effort. 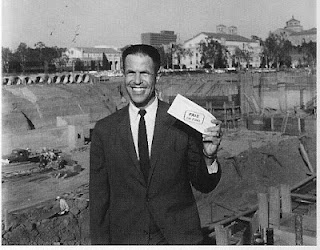