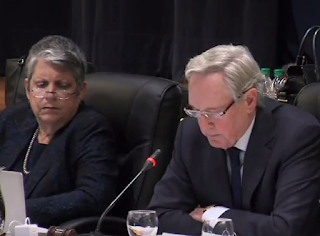 We'll be catching up with the recent Regents meeting as time permits. The full audio for indefinite archiving has now been captured (it's trickier than you might think) and has to be edited to remove blank areas where there was no open session. Some of the editing has been done; other parts remain.

In the interim, you probably know that there has been an investigation into UCOP and UC prez interference with a state audit. At the meeting of November 16, 2017, the Regents implemented some new procedures and required the UC president to make an apology - which she did.

From the San Francisco Chronicle: The University of California regents took disciplinary action against President Janet Napolitano on Thursday, publicly admonishing her for authorizing actions that led to her staff’s interference with a state auditor’s investigation last year. The regents also ordered Napolitano to apologize for approving the scheme that resulted in her chief of staff and his deputy pressuring campuses to change their responses to a confidential state auditor survey to remove negative remarks and instead have them reflect positively on the president’s office.

“The president’s decision to approve a plan to coordinate the survey responses reflected poor judgment and set in motion a course of conduct that the Board of Regents finds unacceptable,” UC Regents Chair George Kieffer said during a UC regents meeting in San Francisco with Napolitano sitting beside him.

“I regret deeply that I did not show better judgment,” Napolitano said in her apology. “I made this decision. I made a serious error in judgment. I apologize.”

The regents’ action came after an hours-long closed-door session and as the board publicly released an independent fact-finding report by retired state Supreme Court Justice Carlos Moreno. The report found that Napolitano’s chief of staff, Seth Grossman, and his deputy, Bernie Jones, directed the interference and then tried to cover their tracks. Both executives resigned from their jobs last week and have denied wrongdoing. During a news conference after the meeting, Kieffer said Grossman and Jones would have faced “serious disciplinary actions” if they had not resigned...

Official report on the audit: http://regents.universityofcalifornia.edu/regmeet/nov17/b2attach3.pdf