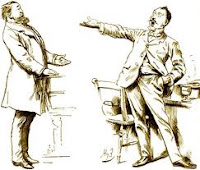 If you have followed the issues surrounding the Post-Employment Benefits Task Force report, you know there was a majority report calling for a two-tier pension and providing the Regents with Options A and B - both defined-benefit (DB) plans. The dissenters put an option C back on the table - also a DB plan. A and B were "integrated" with Social Security; C is a simpler plan that is not integrated. (Go to earlier posts on this blog for more details.)

Now the majority has replied to the dissenters. You can find their reply at http://universityofcalifornia.edu/sites/ucrpfuture/files/2010/09/peb_dissenting_response_0910.pdf

The response to the dissent appears to me to be largely saying that the majority should be seen as nice, hardworking folks who looked at all the issues, weighed all considerations, and came to a conclusion. It really never says to the dissenters that "you are wrong" or "you didn't understand the issues." Rather, it muses over the difference between options A, B, and C and points to differences between DB plans and defined-contribution (DC) plans.

So why was it written? Probably so that the majority could say to the Regents that they replied. It is an attempt to have the last word without really saying anything that wasn't in earlier documentation.