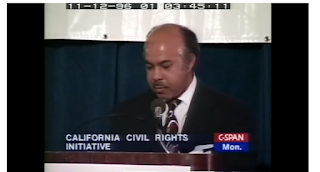 After Regent Ward Connerly and Gov. Pete Wilson had the Regents enact an anti-affirmative action admissions policy for UC, they got California voters to pass Prop 209 in 1996 which embedded the policy into the state constitution. UC now might ironically use 209 as a defense against charges of reverse discrimination, quotas, etc., since it insists its policies comply with 209 and have done so for a long time. That issue may now come up as the Trump administration challenges affirmative action. See the article below:

The reversal would restore the policy set during President George W. Bush’s administration, when officials told schools that it “strongly encourages the use of race-neutral methods” for admitting students to college or assigning them to elementary and secondary schools.

“The executive branch cannot circumvent Congress or the courts by creating guidance that goes beyond the law and — in some instances — stays on the books for decades,” said Devin M. O’Malley, a spokesman for the Justice Department.

The Supreme Court has steadily narrowed the ways that schools can consider race when trying to diversify their student bodies. But it has not banned the practice.

Now, affirmative action is at a crossroads. The Trump administration is moving against any use of race as a measurement of diversity in education. And the retirement of Justice Anthony M. Kennedy at the end of this month will leave the court without its swing vote on affirmative action and allow President Trump to nominate a justice opposed to a policy that for decades has tried to integrate elite educational institutions.

A highly anticipated case is pitting Harvard against Asian-American students who say one of the nation’s most prestigious institutions has systematically excluded some Asian-American applicants to maintain slots for students of other races. That case is clearly aimed at the Supreme Court.

“The whole issue of using race in education is being looked at with a new eye in light of the fact that it’s not just white students being discriminated against, but Asians and others as well,” said Roger Clegg, president and general counsel of the conservative Center for Equal Opportunity. “As the demographics of the country change, it becomes more and more problematic.”

The Obama administration believed that students benefit from being surrounded by diverse classmates, so in 2011, the administration offered schools a potential road map to establishing affirmative action policies that could withstand legal scrutiny.

In a pair of policy guidance documents, the Education and Justice departments told elementary and secondary schools and college campuses to use “the compelling interests” established by the court to achieve diversity. They concluded that the Supreme Court “has made clear such steps can include taking account of the race of individual students in a narrowly tailored manner.”

It reaffirmed its view in 2016 after a Supreme Court ruling that said that schools could consider race as one factor among many.

In that case, Fisher v. University of Texas at Austin, a white woman claimed she was denied admission because of her race, in part because the university had a program that admitted significant numbers of minorities who ranked in the top 10 percent of their class.

“It remains an enduring challenge to our nation’s education system to reconcile the pursuit of diversity with the constitutional promise of equal treatment and dignity,” Justice Kennedy wrote for the 4-3 majority.

The Trump administration’s plan would scrap the existing policies and encourage schools not to consider race at all. The new policy would not have the force of law, but it amounts to the official view of the federal government. School officials who keep their admissions policies intact would do so knowing that they could face a Justice Department investigation or lawsuit, or lose federal funding from the Education Department.

A senior Justice Department official pushed back against the idea that these decisions are not about rolling back protections for minorities. He said they are hewing the department closer to the letter of the law.

He noted that rolling back guidance is not the same thing as a change of law, so that the decision to rescind technically would not have a legal effect on how the government defends or challenges affirmative-action related issues.

The move comes at a moment when conservatives see an opportunity to dismantle affirmative action.

Attorney General Jeff Sessions has said his prosecutors will investigate and sue universities over discriminatory admissions policies. And the conservative-backed lawsuit against Harvard is being pushed by the same group, the Project on Fair Representation, that pressed Fisher.

Anurima Bhargava, who headed civil rights enforcement in schools for the Justice Department under President Barack Obama and co-authored the Obama-era guidance, said that the policy withdrawal was timed for brief filings in the Harvard litigation, due at the end of the month.

“This is a wholly political attack,” Ms. Bhargava said. “And our schools are the place where our communities come together, so our schools have to continue to promote diversity and address segregation, as the U.S. Constitution demands.”

A spokeswoman for the Education Department did not respond to repeated inquiries for comment.

But the policy shift comes as no surprise to civil rights advocates, who say it is only the latest measure by the Trump administration to dismantle policies aimed at protecting children and minority communities.

“There’s no reason to rethink or reconsider this, as the Supreme Court is the highest court in the land and has spoken on this issue,” said Catherine Lhamon, the former head of the department’s office for civil rights under Obama. “The Supreme Court has been unequivocal about the value of diversity and the core of achieving it, because it reflects the America. To retreat from those principles is damaging to the fabric of our country and to our students’ learning.”

Education Secretary Betsy DeVos actually has seemed hesitant to wade in on the fate of affirmative action policies that date back to a 57-year-old executive order by President John F. Kennedy, who recognized systemic and discriminatory disadvantages for women and minorities.

The Education Department did not join the Justice Department in formally intervening in Harvard’s litigation.

“I think this has been a question before the courts and the courts have opined,” Ms. DeVos told The Associated Press. “I think the bottom line here is that we want an environment where all students have an opportunity, an equal opportunity to get a great education.”

But Ms. DeVos’s new head of civil rights may disagree.

Kenneth L. Marcus, who was  confirmed last month in a party-line Senate vote, has been vocal in opposing affirmative action. Since his nomination, dozens of civil rights groups have raised alarms about Mr. Marcus’ record.

Under Mr. Marcus’ leadership as founder and president of The Louis D. Brandeis Center, a human rights organization that champions Jewish causes, the organization filed an amicus brief in 2012, the first time the Supreme Court heard the Fisher v. University of Texas at Austin. In the brief, the organization argued that “race conscious admission standards are unfair to individuals, and unhealthy for society at large.”

The organization argued that Asian-American students were particularly victimized by race “quotas,” that were once used to exclude Jewish people.

Conservative advocacy groups see the resurrection of the Bush-era guidance by the Education Department as a promising sign. Mr. Clegg of the Center for Equal Opportunity, said the Justice Department preserving the Obama-era guidance would be akin to “the F.B.I. issuing a document on how you can engage in racial profiling in a way where you won’t get caught.”

As the implications for affirmative action for college admissions plays out in court, it is unclear what the decision holds for elementary and secondary schools. New York City is embroiled in a debate about whether to change entrance criteria — currently a single test — into its most elite and prestigious high schools to allow for small increases in black and Latino students.
Posted by California Policy Issues at 9:18 AM