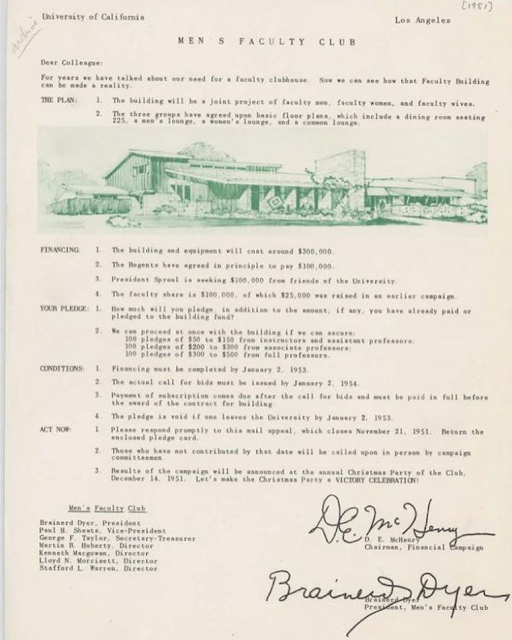 The building shown above is not quite what was eventually constructed, nor is it just for men. Dean McHenry, whose signature appears on the document, went on to be chancellor at UC-Santa Cruz where he was deemed to be at fault: (click on the link below)

===
By the way, if you are a member, you should have received the following notification:

Board of Governors Elections
Members of the Faculty Center Association

We are voting to fill the office of President-elect and two Member-at-large seats on the Board of Governors.  We hope you will read carefully the biographical statements submitted by the candidates and will participate in this important election (link to candidates' statements).*  The Faculty Center has a new unparalleled opportunity to make major improvements to our facility while enhancing our business and making this the central home for all UCLA faculty, staff and affiliates.

Based on responses to the Call for Nominations issued in April, the Nominations and Election Committee’s slate is as follows:

Members-at-large (2 vacancies)
You may vote for 2 candidates, including write-ins