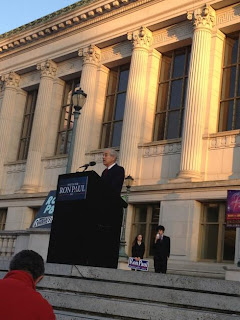 Lots of news stories are appearing at this time of the year summing up events of 2012.  John Myers, who writes a Capitol Connection blog for a Bay Area TV station, including various photos of such events.  From the presidential campaign, he included a picture of Ron Paul speaking at UC-Berkeley on April 5, 2012 and leading audience chants of "End the Fed."

So maybe the image of UC-Berkeley as exclusively leftist needs some qualification if Paul could have a successful rally there.  Or maybe the photo and event just reflect the fact that there are those on the left and on the right who are suspicious of central banking and the Federal Reserve.

In any case, the photo comes from:
http://www.news10.net/news/california/article/223072/430/California-politics-2012-social-media-style
Posted by California Policy Issues at 8:11 AM