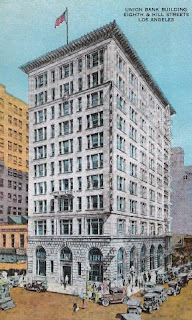 In earlier posts (scroll to bottom), we reproduced some UC Extension catalogs from the early 1930s from the LA area.  I have now located another catalog - this one from September 1930.

The Extension operation operated out of a building on 8th and Hill Street in downtown LA with sites for courses scattered around the County and out to Ventura and Riverside.  Extension appears to have been run out of Berkeley (UCLA was still the “Southern Branch” of UC and had just moved to its Westwood location) but the UCLA provost was later represented on its controlling board.  He is not listed as of Sept. 1930, however.

Some academic courses offered might be credited toward a degree.  Courses listed include Business and Protective Law for Women, Mental Tests and Measurement, The Teaching of Subnormal Children, The Theory of Flight, Television-Telephotography-Picture Broadcasting, and Tap Dancing.

In the earlier posts, I indicated I had not found a picture of 8th and Hill from that era.  Now – see picture – we have one.  You can read the September 1930 catalog below.


Earlier posts on this blog of Extension catalogs from back in the day: