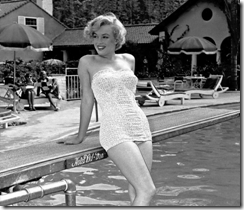 A news note on the UCLA hotel/conference center issue.

The Hotel Bel-Air, just north of campus, is about to reopen, albeit with a labor dispute in progress. And Marilyn Monroe (at left and in the video below from a 1953 visit to the Hotel) won’t be staying there this time around.

When the Hotel Bel-Air reopens next week after a two-year renovation, the resort's mascot swans — Chloe, Athena and Hercules — will still occupy the lush 12-acre property visited by presidents, movie stars and other dignitaries. But absent will be most of the union workers who washed dishes, made beds and laundered towels at the hotel. They were laid off when the hotel closed, and many of them will return only to march and protest outside the hotel entrance. The historic hotel, closed in 2009 for the multimillion-dollar upgrade, will reopen Friday with only about a dozen of its former union workers on the staff of 275, dealing a blow to the hotel workers union and its members. The protest will be organized by the hospitality workers union Unite Here Local 11, which contends the hotel used the construction project to oust the union from the hotel…

Bottom line: More local hotel rooms coming on line – although these will be swanky ones. Presumably, the long-awaited review of the campus hotel/conference center project will take account of such developments. We are patiently waiting.

The Bel Air Hotel and Marilyn had it right. UCLA doesn't!