The State Budget in 3 Tables 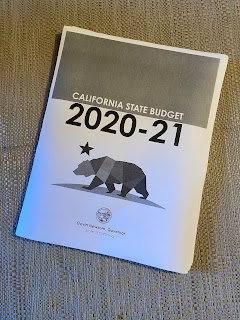 Let's start with the caveat that the analysis presented below is preliminary in several senses. Yours truly has had to go through various documents hastily to pull together the tables below. Possibly, there are errors. In addition, the budget itself is contingent in various dimensions.

At least as the governor has depicted it, it comes closer to his May Revise strategy of not assuming federal aid that may or may not be forthcoming than to the legislature's reported desire to budget on the assumption there would be aid. (Both strategies involved contingencies for automatic budget revision, depending on what happens at the federal level.) In addition, this budget - just as with any budget - has underlying economic projections that may or may not be accurate. The current economic situation, however, is more uncertain than normal and depends on noneconomic factors such as whether a vaccine for the coronavirus will come along, what happens in the November elections, etc. Finally, even data that normally might be expected to be largely in the past is not. Income taxes that would normally have been received in April were postponed to July. So the revenue assumptions for this year may be off.

The coronavirus crisis came suddenly within the fiscal year that is ending today. So it affected the completion of this year as well as the outlook for 2020-21. Table 1 below shows the effect. Revenue drops sharply, even though significant federal aid was received. Expenditures drop somewhat, but not enough to deal with the lost revenue. So, the result is reserves were drawn down.

Reserves are kept in various accounts in California. The general fund, which is like the state's checking account, has a balance. Under former Governor Brown, three other reserves were created or filled: the Budget Stabilization Account (BSA or rainy day fund), the Safety Net Reserve, and a reserve for K-14 (Prop 98 reserve). If you add the changes in the general fund balance and the other accounts, there is a net drawdown of around $7 billion in the current year ending today. See Table 3, first data column.

What happens next year (which starts tomorrow)? Spending is cut a lot. Revenue continues at roughly the rate of the current year. See Table 2. When all is said and done, the total reserve drawdown next year is about $5 billion. (Table 3) Given the remaining reserve projected to exist at the end of 2020-21, we might go another year until the entire past reserve accumulation would be gone.

But who knows? Maybe someone will come up with a magic serum soon. Maybe more aid will come from the feds. But it won't be pleasant, whatever happens. 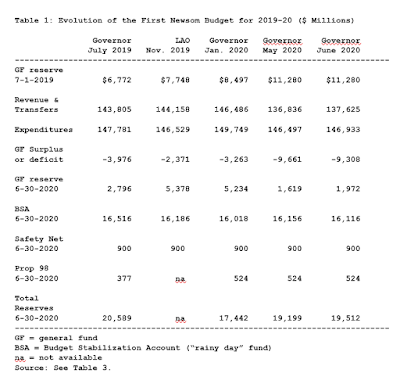 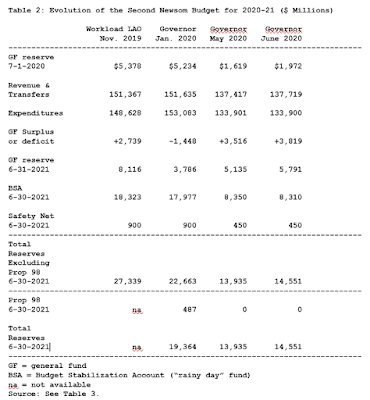 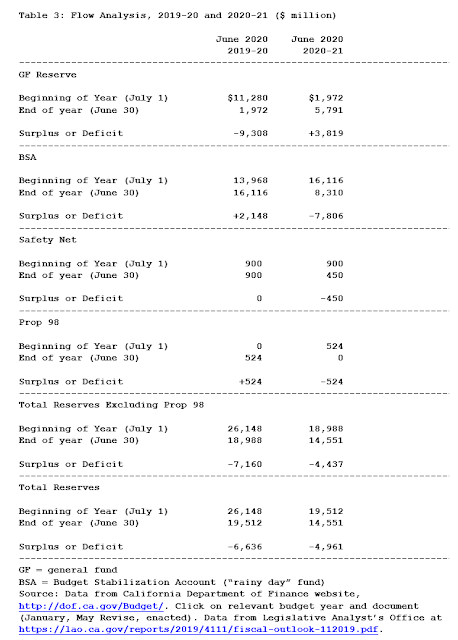