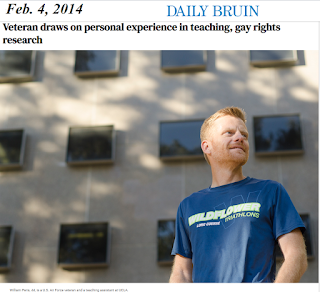 In February 2014, grad student and TA William Peris was profiled in the Daily Bruin as follows:


As he paced in front of a class of about two dozen students, William “Ajax” Peris appeared assured and calm. He displayed the same confident demeanor that helped him succeed at testing heat-seeking missiles and monitoring no-fly zones in Iraq throughout the 1990s, after the first Gulf War.
The 44-year-old teaching assistant and U.S. Air Force veteran is in the process of earning a doctorate at UCLA. Peris was also the commander of the UCLA Air Force ROTC detachment from 2009 to 2012, where he managed and trained cadets in addition to teaching his own courses at the university.
Peris, who received his master’s degree last quarter, is currently working on a research project that explores why some individuals hold anti-gay attitudes and why others have a liberal perspective toward gay rights. His motivation for pursuing the project stems partly from his own personal experiences. As a gay man in the military,Peris said he sometimes felt the need to conceal part of his identity.

For more than two decades, the political science graduate student served as a pilot in the U.S. Air Force. Under “don’t ask, don’t tell,” a former military policy which banned openly gay men and lesbian women from serving in the military, Peris said he kept silent about his personal relationships.

“People wore their wedding rings to work; people put up pictures of their husbands or wives,” Peris said. “They just talked about their lives – I couldn’t do that.”

Peris started the political science graduate program in 2010 and later took a gap year to focus on his duties as a ROTC commander and professor of aerospace studies. In the fall of 2012, he resumed his graduate studies.

As a teaching assistant, Peris said his favorite moments are when he helps a student comprehend difficult material that they previously had trouble understanding...

Fast forward to the current period:

The U.S. Education Department is investigating whether the University of California, Los Angeles inappropriately opened a review of a lecturer for using the N-word in two classes earlier this month, questioning whether the school stifled his academic freedom. In a letter to UCLA Chancellor Gene Block dated Monday and reviewed by The Wall Street Journal, the Education Department expressed concern that the university “improperly and abusively targeted” the instructor in violation of UCLA’s own policies regarding free expression. The letter was sent to UCLA Thursday afternoon, according to a person familiar with the matter.In early June, William Peris, a political-science lecturer who is white, gave lectures about the history of racism in the U.S. in two classes. In the online sessions, he read from Martin Luther King Jr.’s “Letter from a Birmingham Jail” and showed clips from a documentary that included graphic descriptions and images of lynchings. Both the text and video included the N-word. Many students expressed “distress and anger” over the lectures and Mr. Peris’s reaction to their discomfort, according to a letter written by the political-science department chair and vice chairs, and shared with the department. His response “escalated the situation rather than engaging in the thoughtful and open discourse that we expect from our faculty. We share students’ concerns that the lecturer did not simply pause and reassess their teaching pedagogy to meet the students’ needs, particularly during this sensitive time,” they wrote, referencing the recent killings of George Floyd, Breonna Taylor and other black people. UCLA’s Discrimination Prevention Office has launched a review of the matter, the school said.“Targeting an instructor for reading from the works of Dr. King or showing a documentary quoting him is a direct assault on academic freedom and constitutionally protected free speech,” according to the Education Department’s letter, signed by Robert L. King, assistant secretary of the Office of Postsecondary Education.That letter links to coverage about the incident on Fox News and in a conservative publication, the Washington Free Beacon. Mr. Peris swiftly issued apologies via a letter and video, according to the political-science-department statement. He didn’t immediately respond to a request for comment Thursday. The Education Department instructed UCLA to hand over emails and other records for Mr. Peris and others in the political-science department, as well as material related to the school’s faculty code of conduct, and make available for interviews the chancellor, Mr. Peris and others within a month...

In a statement, the school said it refers all reports of alleged misconduct for review, and following that procedure “does not mean that anyone has been targeted for disciplinary action or that any matter has been prejudged.”...

Apart from the politics and PR issues raised by such incidents, the university needs to establish some guidelines. Absent guidelines, what happens is that instructors are left either to avoid controversial issues, or to risk suspensions, etc. The guidelines need to be provided both for instructors and students. Expectations for students who plan to enroll in courses that in one way or another deal with history, sociology, economics, political science, and related fields need to be established as part of orientation. The article above concludes with the following:

UCLA said it takes seriously its role in upholding academic freedom, and in ensuring mutual respect and fair treatment for students and faculty. “The balance of these interests is a difficult one and we endeavor always to protect both interests with care and deliberation,” the school said.

Balance of interests sounds nice, but has little guidance value in practice. And the balancing seems to occur after the incident, not before.
Posted by California Policy Issues at 9:28 AM