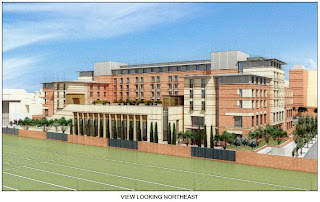 An earlier post noted an op ed in the Daily Bruin by Laura Lake on the grand hotel project slated to occupy a location roughly across from Ackerman where a parking structure now sits.  A rebuttal op ed ran yesterday by Steve Olsen, UCLA's chief financial officer (and a very capable individual).  Here is an excerpt:

The Meyer and Renee Luskin Conference and Guest Center will become a reality at UCLA in 2016 thanks to a generous gift from two alumni who share UCLA’s vision of creating a place where academics from all across the world can gather to share ideas, host world-class conferences and stay on our campus, experiencing the inspiration and vitality that are part of UCLA. Once built, it will be a boon both to the campus and the larger Westwood community.  It is unfortunate that Save Westwood Village and its co-president, Laura Lake, are trying to impede that progress with a lawsuit. In fact, they have a long history of opposing projects on campus and in the community that have ultimately gone on to successfully serve UCLA and Westwood Village. UCLA believes their lawsuit is utterly without merit and we fully expect to prevail...

The full rebuttal op ed is at:
http://dailybruin.com/2013/01/10/submission-claims-against-approval-process-for-luskin-conference-and-guest-center-lack-merit/

But the problem is that the rebuttal misses the larger key point.  There could have been alternatives, less grand to be sure, that would have met UCLA's needs and would have been in total compliance with the wishes of the donors.  Instead, a grandiose  project was put before the donors and sold to them as the best use of their money.  There is no way that the donors would have approached UCLA and said what we really want is a grand hotel.  It simply didn't happen that way.  The project was proposed to them by high level campus administrators.  No one has ever asserted a different history.

The original plan would have replaced the Faculty Center and was so grandiose that it led to a faculty outcry.  It was justified by a contrived and indefensible consulting report containing glaring errors.  As a result of the outcry, the project was then slightly scaled back and relocated.

The Regents were very skeptical of the revised project as the recording of the March meeting posted on this blog makes clear.  They were then subject to a campaign to convince them otherwise, the culmination of which was a letter - ostensibly spontaneously written by the donors - that essentially said it would be the grand hotel or nothing.  Not wanting to reject $50 million, the Regents approved the project and put the best face they could on their change of heart.  What choice did they have?  Again, all of this is in the public record: the letter, the Regents meetings (with the audio we posted), etc.

If you look at the Regents' procedures for capital projects - a general topic noted in this blog in earlier posts - they in fact have no capacity for real oversight.  Campuses send up grand plans with Excel sheets that pencil out and pretty architectural drawings.  There is no independent auditing capacity at the Regents.  There is no mechanism to go back and review whether the promises made were actually delivered once the structures are built.  We are talking really big bucks here in an age where dollars are scarce.  If you want real oversight, well meaning, part-time Regents cannot provide it.  They would need professional auditors, independent of UCOP.

We noted in our previous post on the governor's budget that he is very interested in efficiency and cost saving.  And he expresses an explicit concern about UC's capital projects process.  The building and bond bureaucracies on the campuses are artifacts of an earlier age of UC physical expansion - which the state no longer will support.  That age ended in the 1990s, but the incentives to build-and-bond remain.  The needs of UC and UCLA are more in the human capital area now, not physical capital.  We need scholarships, research grants, endowed chairs, etc., far more than we need brick and mortar.

In a sense, the grand hotel and the Regents' initial resistance to it should be the canary in the coal mine for the old approach.  But it is not clear that the message has gotten through.  It will require leadership - in Oakland and in Murphy Hall and at the Regents - to change the system. What the governor's budget message is saying is that if the system isn't fixed internally, there will be changes imposed from outside.  It may be painful to do the fixing internally and so far there has been little sign of it.  It will be more painful if the fix comes from outside UC.

UPDATE: The Olsen rebuttal also appears at:
http://today.ucla.edu/portal/ut/claims-against-approval-process-242540.aspx
Posted by California Policy Issues at 7:54 AM