If you are on campus with an emergency, use a landline for 911 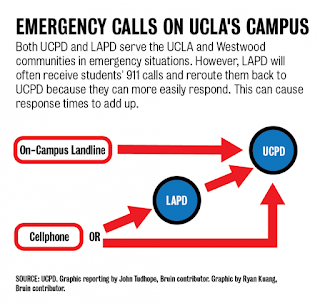 The Bruin carries an article indicating the on-campus landlines are the best way to make 911 calls to reach the UCPD:

Dialing 911 in Westwood does not guarantee that university police will receive the call. UCPD Lt. Kevin Kilgore said dialing from a cellphone in dense urban environments like Westwood can prevent emergency calls from reaching the nearest emergency communication center. UCPD has an on-campus 911 dispatch center, which is the emergency center closest to students dialing from Westwood.

But emergency phone calls are sometimes directed to other departments, including the LAPD and the California Highway Patrol, Kilgore said. He added emergency calls routed to stations outside of Westwood can cause delays for callers in crisis.

“If you’re calling from a cellphone, cellphones bounce off of towers,” he said. “Depending on what cellphone tower that bounces off of you may get UCLA’s 911 system, you may get LAPD, you may get CHP.” ...

Full story at https://dailybruin.com/2018/02/27/cellular-911-calls-from-ucla-travel-beyond-westwood-may-cause-delays/
Posted by California Policy Issues at 9:03 AM