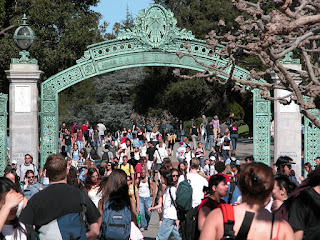 Inside Higher Ed has a long article on the Twitter threat by President Trump to cut off funding from UC-Berkeley because of recent events in which violence occurred and a speech by Milo Yiannopoulos was cancelled.* Basically, the article discusses whether there is authority to cut off funding.

Generally, the article says that there is not at present such authority and that Berkeley was attempting to have the speech go forward when public safety concerns outweighed other considerations.

However, the article contains this paragraph:

Federal laws do of course impose requirements on colleges receiving federal aid that have nothing to do with the aid, per se. And some members of Congress have used such laws to oppose certain trends on campuses. In the 1980s, U.S. Representative Gerald Solomon, a New York Republican, attached to several appropriations bills provisions that cut off federal funds to institutions that did not permit military recruiters on campus. At the time, many law schools did ban military recruiters, saying that the military's anti-gay discrimination (since ended) violated institutional policies. In 2005, the U.S. Supreme Court upheld the law.

So, apart from the specifics of the Berkeley situation, Congress could create such authority, a possibility that can't be dismissed given its current political leanings.
---
*https://www.insidehighered.com/news/2017/02/03/experts-say-trump-cannot-cut-berkeleys-funds-despite-his-tweet
Posted by California Policy Issues at 7:29 AM