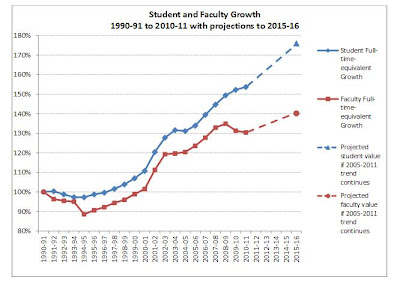 A report to the Regents' Committee on Educational Policy for the May 15 meeting highlights the growth in the student/faculty ratio at UC.  [Click on the images above and below to enlarge them.] 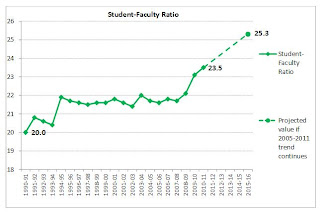 The report - entitled "Academic Performance Indicators at the University of California - more generally appears to be an attempt to respond to the governor's push to make the UC budget contingent on meeting various performance measures such as graduation rates.  You can find it at http://regents.universityofcalifornia.edu/regmeet/may13/e1.pdf

Note: An earlier post at http://uclafacultyassociation.blogspot.com/2013/05/may-regents-meeting-preliminary-agenda.html provided the general agenda for the upcoming Regents meeting.  Apart from the item in this post and the one just prior, there is scheduled to be discussion of a report entitled "State of the University of California."  Apparently, there will be no advance distribution of that report which will be presented orally by President Yudof.

Update: As prior posts have noted, the state seems to have a received a windfall of $4+ billion, probably thanks to the fiscal cliff episode around New Years.  The state controller has now confirmed a) the receipt of the windfall and b) that the general fund now has a positive balance of around $4 billion.  It will be interesting to see if Yudof and/or the Regents have any thoughts about the budgetary news.  The controller's report through April is at http://www.sco.ca.gov/Files-ARD/CASH/fy1213_april.pdf
Posted by California Policy Issues at 8:56 AM