The business of athletics 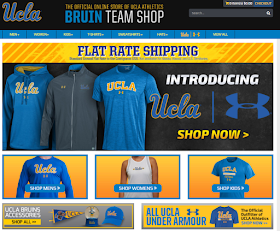 In various prior postings, we have noted litigation surrounding the status of college athletes. Specifically, are they just amateur scholars? Or are they employees entitled to compensation in various forms, unionization, etc.? Lest there be any doubt about the commercial side of college athletics, here (below) is a recent UCLA news release:

UCLA, Under Armour Kick Off Partnership:
The Bruins signed a groundbreaking 15-year performance footwear and apparel agreement with Under Armour.

LOS ANGELES - The record-breaking partnership between UCLA and Under Armour® (NYSE:UA, UAA) officially commences July 1, 2017. The 15-year performance footwear and apparel agreement brings together one of the world's most recognizable collegiate athletic programs and the global leader in innovative performance products.

As part of the partnership, Under Armour will exclusively design and supply the footwear, apparel and equipment for training and game-day uniforms for UCLA's men's and women's varsity athletic teams. The long-term agreement between the university and brand, which was originally announced in May 2016, is the largest apparel deal in the history of the NCAA, reaffirming UCLA's status as a world-class institution and Under Armour's position as a global leader committed to collegiate athletics.

"We are excited to officially embark upon this journey with Under Armour and to introduce a cohesive new branding initiative that will unite not only our teams, but also the entire UCLA family," said UCLA Director of Athletics Dan Guerrero. "As we look toward the future, Under Armour's philosophy of innovation, its cutting-edge technology and its commitment to storytelling make it the perfect partner for UCLA. Together, we will go beyond great."

"We are honored and excited to officially welcome UCLA into the Under Armour family," said Ryan Kuehl, Senior Vice President, Global Sports Marketing, Under Armour. "UCLA's storied athletic success and commitment to innovation will be amplified through our collaborative partnership over the next 15 years as we unite the athletic department, campus community and Bruins fans in California and all over the world."

The main component of the branding initiative is a unified and consistent look for UCLA Athletics, from the logos to the proprietary font on the uniforms and the custom color scheme. The primary logo will remain a UCLA script, which has been updated by removing the black outline and the tail under the four letters.

Fans will get their first look at the new football uniforms at the UCLA Football Bruin Viewin' exclusive event for season ticket holders at the Rose Bowl on July 15.

Strengthening its global brand impression by aligning with UCLA's significant international student pool and impressive roster of athletes from all over the world, Under Armour will continue to expand its West Coast footprint with a commitment to open new retail locations in the greater Los Angeles area - including on LA's Westside. The brand will also offer annual internship opportunities for UCLA students. Additionally, through this new partnership, UCLA Athletics will extend its ability to provide apparel allocations for the UCLA Spirit Squad and Bruin Marching Band while enhancing its allocations to campus recreation and its club sports teams.

Licensed UCLA/Under Armour gear will be available beginning July 1 at the Bruin Team Shop and at the UCLA Store at Ackerman Student Union.

The news release above comes with a video: