Noted Book from the Past Year 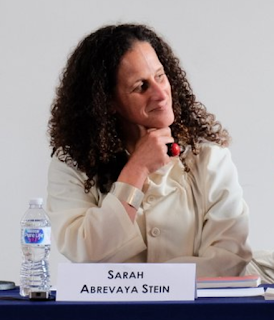 Adding to the chorus of critics’ raves, The Economist has named “Family Papers: A Sephardic Journey Through the Twentieth Century,” a new book from UCLA professor of history Sarah Abrevaya Stein, to its best of 2019 list.

Stein’s latest work explores the intertwined histories of a single family (the Levys), Sephardic Jewry, and the dramatic ruptures that transformed southeastern Europe and the Judeo-Spanish diaspora. It has received glowing reviews from The New York Times, the Wall Street Journal, the Los Angeles Review of Books and more.

Stein, who holds the Maurice Amado Endowed Chair in Sephardic Studies at UCLA, spent a decade researching this work, a journey that took her to a dozen countries, dozens of archives, and into the homes of a Sephardic clan that constituted its own, remarkable global diaspora.

The phrase “Sephardic Jew” refers to those of Spanish or Hispanic background. Stein’s new book begins with a family originally from old Salonica, a Mediterranean seaport of the Ottoman Empire, now Thessaloniki, Greece. In the late 19th century it was home to a large community of Spanish Jews.

The idea to tell the story of the Levy family came as Stein researched another book, an English-language translation of the first Ladino (which refers to a background of mixed Spanish, Latin American or Central American heritage) memoir ever written, “A Jewish Voice from Ottoman Salonica: The Ladino Memoir of Sa’adi Besalel A-Levi.”

“He spent the last years of his life writing a Ladino-language memoir to air a lifetime’s worth of grievances,” said Stein, who is also the Sady and Ludwig Kahn Director of the Alan D. Leve Center for Jewish Studies at UCLA.

Her book traces the history of a collection, how one family archive came to be built and preserved.

The existence of Sa’adi’s personal memoir, one sole copy written in written in soletreo (the unique handwritten cursive of Ladino), outlived wars; the collapse of the empire in which it was conceived; a major fire in Salonica; and the Holocaust, during which Jewish texts and libraries as well as Jewish bodies were targeted by the Nazis for annihilation.

Stein was fascinated by the fact that this manuscript passed through four generations of Sa’adi’s family, traveling from Salonica to Paris, from there to Rio de Janeiro and, finally, to Jerusalem.

“It somehow eluded destruction or disappearance despite the collapse of the Salonican Jewish community and the dispersal of the author’s descendants over multiple countries and continents,” she said. “It knit together a family even as the historic Sephardi heartland of southeastern Europe was unraveling.”

Stein’s book traces decades of family correspondence and shared memories to reveal what became of Sa’adi’s 14 children and their far-flung descendants. Most fled Salonica after the collapse of the Ottoman Empire, or attempted to flee later in 20th Century, when 37 members of the Levy family perished in the Holocaust.

Source: https://www.cjs.ucla.edu/sarah-abrevaya-stein-and-lia-brozgal-colonial-tunisia-from-the-gutter-up-ninette-of-sin-street-jews-translation-and-franco-tunisian-literature/
Posted by California Policy Issues at 7:14 AM