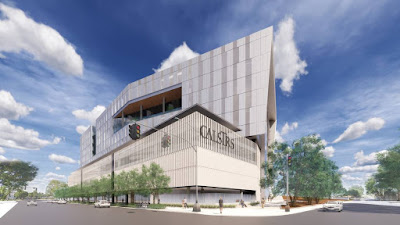 The UC pension system (UCRP) - is the third largest California public pension program, after CALPERS (which covers most non-UC state employees) and CALSTRS (which covers teachers). However, there the connection ends.

CALPERS has had one scandal after another ranging from improper behavior of executives and board members to questionable election procedures. UCRP has no such history.

Today, the Sacramento Bee is running an article about CALSTRS constructing an extravagant addition to its headquarters ($300 million) - shown in the photo above - at a time when it is the most underfunded of the three pension funds.*

It is obviously politically difficult for the UC public relations folks to make the case that UCRP is different from the other two pension funds. UCRP has no grand scandals and no extravagant buildings. It has no electoral shenanigans to get on the board, since UCRP's trustees are the Regents. So we will make those points here and encourage readers of this blog to spread the word. UCRP is the state's third largest public pension fund, but there the similarity to the other two stops.
====
*https://www.sacbee.com/news/politics-government/the-state-worker/article238082204.html
Posted by California Policy Issues at 7:57 AM