California Looks Better Than Most Other States, But...

The two charts below from the Center on Budget and Priorities suggest that California looks good compared to most other states in regard to overall state higher ed spending per student:
[Click on the charts to clarify.] 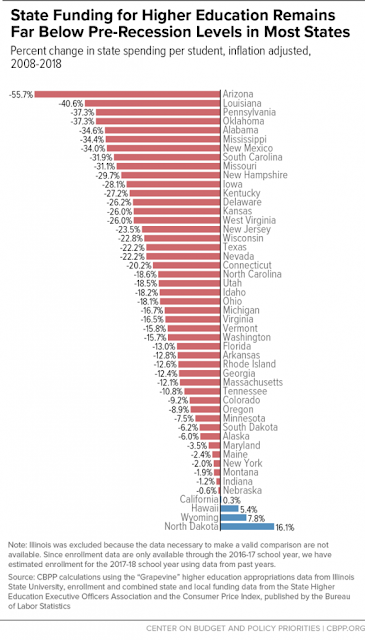 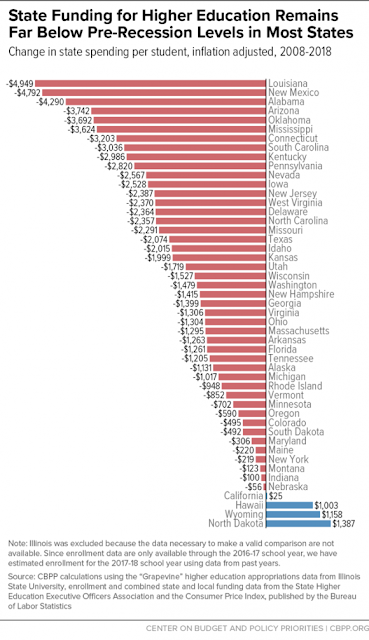 Keep in mind, however, that the path between the two dates was U-shaped. That is, spending fell and then came back. But during the period in between, there were real cuts and you can't go back in time and fill in what was lost. Put another way, if I give you $1000 in year 1 and year 3, but only $600 in year 2, that is less money than if I had given you $1000 each year. In the first scenario, you are down by $400 for the three years combined relative to the second scenario.

Source of charts: https://www.cbpp.org/research/state-budget-and-tax/unkept-promises-state-cuts-to-higher-education-threaten-access-and
Posted by California Policy Issues at 7:54 AM

Using 2008 as a base year is also problematic as cuts to California's higher education started before 2008. California higher ed institutions spend less per student than any other state except Florida. See the maps of state metrics, total educational revenue per fte data at: