And the link is where?

NOTE: Although the LA Times article says the Title IX report on the Heaps affair has been "made public," yours truly has been unable to find a link to it on the UCLA website as of this morning (Dec. 8), including on the official page devoted to the Heaps affair: https://www.uclahealth.org/heaps.

The search engine on the UCLA website did not produce the report, nor did a more general Google search. Yours truly used such search terms as "Heaps," "Title IX," "UCLA," in various combinations. What turned up in the searches were older UCLA postings and news articles, but not the report that was "made public" last week. Presumably, the LA Times received a copy along with the various law firms involved. (As the ads reproduced with this post indicate, there is something of a Heaps legal industry developing.)
--- 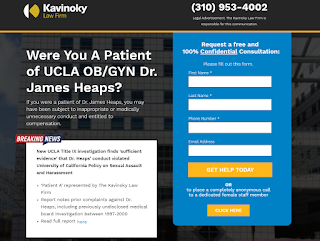 From the LA Times: The behavior of a prominent UCLA Health gynecologist during an exam with a married mother of four amounted to sexual assault and harassment, according to an investigative report by the university made public Thursday. It took UCLA almost two years to complete the investigation into allegations raised by a patient against Dr. James Heaps, a 63-year-old physician who was arrested in June on sexual battery and exploitation charges.

The woman saw Heaps in June 2017 to have an intrauterine device, or IUD, removed after she experienced intense uterine cramping shortly after the device was inserted. During the appointment, Heaps allegedly grabbed the woman’s left breast and her buttocks and fondled her clitoral piercing. The doctor’s behavior frightened and alarmed the woman, who was seeing Heaps because her usual gynecologist was unavailable, and she later told her doctor what happened in the appointment, according to the report and interviews with the patient and her attorneys. A panel of three board-certified physicians and third-party evaluator who reviewed the case were unanimous that Heaps acted inappropriately in touching the woman’s breast and buttocks because she didn’t report pain in either...

Heaps, through his attorneys, has said everything he did was medically appropriate, and his attorneys have said Heaps was a talented physician who saved women’s lives through his work in gynecological oncology...