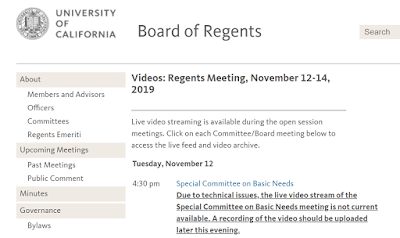 It seems that the "technical issues" besetting the Regents that were supposed to be resolved yesterday evening have extended into this morning.

Note: Two who usually attend Regents meetings presumably will have flown back from Washington, DC this morning. From the Calmatters/Whatmatters email post this morning on yesterday's U.S. Supreme Court DACA hearing:

Attorney General Xavier Becerra was in Washington as his solicitor general argued the case.

Also there: John A. Pérez, University of California Board of Regents chairman, and UC President Janet Napolitano, who developed DACA when she was Obama’s homeland security secretary.

What’s next: A decision by June, the middle of the 2020 presidential campaign.
Posted by California Policy Issues at 6:33 AM