Attentive blog readers may recall that last July we posted an item about a UC initiative with China centered at UC-Berkeley that somehow involved former governor Jerry Brown.*

Although the initiative was touted at the time, we noted that Brown could not be found in the UC-Berkeley directory. Brown has been appearing at various public events occasionally since leaving the governorship, but he has mainly kept a low profile with an occasional news item about his retirement at his ranch.

Brown still isn't in the UC-Berkeley directory, but there are now more details about the program. And it appears to have a UCLA component. From a media release that appeared yesterday: 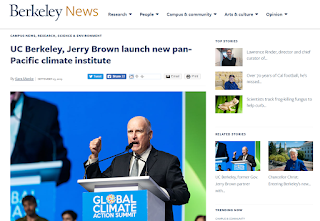 Alex Wang, professor at UCLA School of Law and a member of the school's Emmett Institute on Climate Change and the Environment, will serve as co-chair of the Institute's academic advisory committee. The Institute is a multi-campus project housed at UC Berkeley with collaboration from UCLA, UC Davis, Lawrence Berkeley National Laboratory and others.

"The climate threat doesn't respect borders and it doesn't pause for politics. Now is the time for action from leaders everywhere — for humanity and our common future," said Jerry Brown, chair of the California-China Climate Institute, who was appointed a visiting professor at UC Berkeley in July. "With this Institute, California and China are pushing forward together."

Brown announced the new transpacific initiative with China's Special Representative for Climate Change Affairs Xie Zhenhua, who leads the Institute of Climate Change and Sustainable Development at Tsinghua University — one of China's preeminent research institutions — which will partner with the California-China Climate Institute...

PS: The Sacramento Bee's cartoonist had some fun with the original announcement: