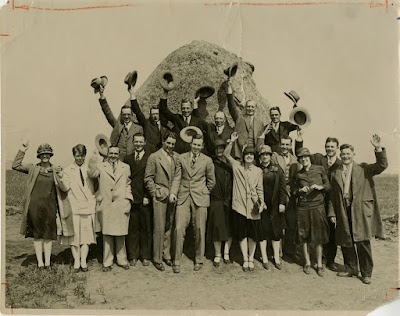 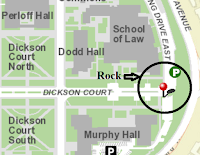 Almost a year ago, we noted the history of Founders' Rock (sometimes Founders without the apostrophe and sometimes Founders' with the apostrophe in the wrong place) with some related photos.* It's not obvious why having a giant rock is what a campus needs, but Berkeley had one so apparently UCLA - at least when it moved to Westwood from the original Vermont Avenue campus - had to have one.** In any case, the rock stood at a prominent place on campus, but was eventually moved to relative obscurity as the map shows.

Recently, as part of the UCLA centennial yet another photo has emerged which we reproduce above.*** It shows the rock, presumably before it was moved from the Perris Valley.

Anyway, you can love it or leave it - your choice:

===
*http://uclafacultyassociation.blogspot.com/2018/06/ucla-history-rock.html.
**You can read about the Berkeley rock and see a picture at:
http://berkeleyheritage.com/berkeley_landmarks/founders_rock.html.
***Source: http://newsroom.ucla.edu/stories/lore-how-ucla-came-into-being-100-years-ago
Posted by California Policy Issues at 8:22 AM