Geographic Grumblings About the Latest Regent

Apparently, there are geographic grumblings about former Gov. Brown's final regental selection. But as the article below notes, the appointee - Jay Sures - will serve only until 2020 unless reappointed by Gov. Newsom.

Ever since Fred Ruiz left the UC Board of Regents, many in the San Joaquin Valley have hoped someone from the area would succeed him.

The wait will continue, at least another year for the region that is home to UC Merced.

In a final snub to the Valley, Gov. Jerry Brown added Jay Sures, a Hollywood talent agent, to the board. Brown announced the selection Jan. 4, three days before he left office.

There has been no Valley representation since Ruiz’s term elapsed in 2016. He is best known as the founder of Dinuba-based Ruiz Foods.

Sures will fulfill the remaining year of Bonnie Reiss’s term through March 1, 2020. Reiss died of cancer on April 2, 2018.

“The San Joaquin Valley has not had a Regent since 2016,” said Democratic Assemblyman Adam Gray of Merced. “The 26-member Board is already brimming with representatives from Los Angeles and the Bay Area, but despite nine different opportunities to correct this lapse, Governor Brown has failed to act.

“I have personally spoken to Governor Brown about what I hoped was his unintentional prejudice, but last week’s appointment of yet another Los Angeles regent tells me he was not listening. It’s downright offensive that despite hosting a UC campus in Merced, the governor refuses to allow a San Joaquin Valley resident on the Board.

“I am optimistic that Governor Newsom is committed to representing all of California and will provide the Valley a voice on the Board of Regents as soon as a vacancy makes that possible.”

Board All Northern, Southern California

The UC board consists of 26 members, 18 whom are selected by the governor for 12-year terms.

Brown appointed or re-appointed 14 of those members. All but two are Democrats (Golden State Warriors owner Peter Guber and CalPERS CFO Michael Cohen are no party preference).

Sures, co-president of United Talent Agency, will join others with Hollywood connections.

Regents Guber and Sherry Lansing also have backgrounds in the entertainment industry.

Other board members took more traditional routes to power: They are lawyers, financiers, or former elected officials.

Throughout his campaign, newly sworn-in Gov. Gavin Newsom indicated the Valley needs more representation on the UC and CSU college boards. However, in a post-election Fresno appearance, Newsom seemed to backtrack, saying many constituencies feel left out.

“There are probably two dozen other groups that also feel like they are not represented — the Asian community, African-American community, and geographic parts of the state — the Inland Empire, the northern part of the state that feel underrepresentation. So the challenge for me is, when you get one appointment over a two-year period, you can’t solve for all of that,” Newsom said on Dec. 7.

In the next four years, six UC regent terms will expire, including four selections made by the state’s last Republican governor, Arnold Schwarzenegger.

Sures will be a short-timer. His term and that of retired real estate developer Hadi Makarechian expire next year. Two more follow in 2021 and 2022.
=============
Current UC Board of Regents 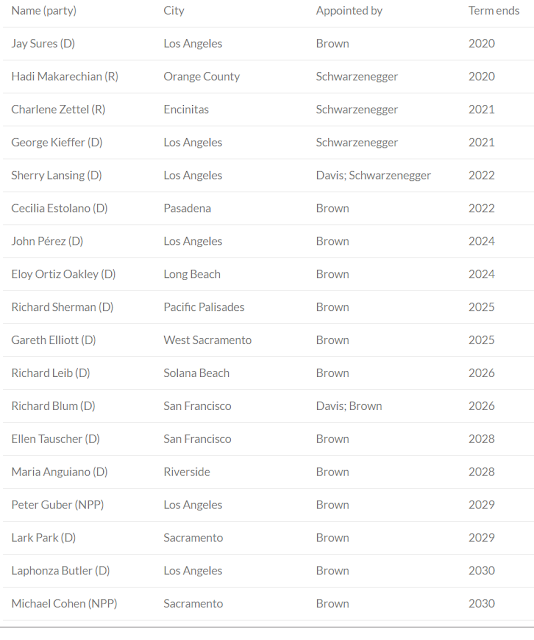