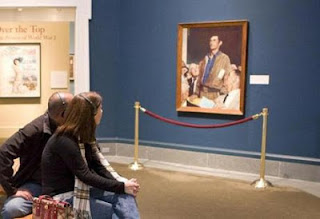 ...apparently went off without major turmoil. (You probably didn't know it was happening. No riot. No damage. No national headlines. Just some over-the-top comments.)

About 150 individuals attended a protest against a speech by a conservative commentator at Bruin Plaza on Monday.

Several student groups, including Socialist Students UCLA and the Young Democratic Socialists at UCLA, organized the protest in response to a lecture by Ben Shapiro at Ackerman Union. Shapiro, who was invited to campus by the Bruin Republicans, graduated from UCLA in 2004 and is the editor-in-chief of the Daily Wire, a conservative news and opinion website.

Tala Deloria, an organizer for Refuse Fascism UCLA, said the group held the protest because its members think Shapiro’s speech hurts marginalized communities on campus. She said she thinks Shapiro is xenophobic, racist and sexist, and added she thinks he has made controversial statements in the past, including saying that transgender individuals have a mental illness.

Henry DeGroot, a fourth-year political science student and organizer with Socialist Students UCLA said the group organized the protest to demonstrate that most students do not agree with Shapiro’s rhetoric. DeGroot added he thinks UCLA broke with campus policy in paying for the event’s security costs after facing pressure from Alliance Defending Freedom, a conservative legal organization.

“This is not really just about one small chapter of Bruin Republicans. It’s about the whole right-wing establishment organizing a cultural war on campuses,” DeGroot said. “We’re here to say that this is coming from the outside, that most students don’t support this and that most students are calling for progressive values, not for anti-gay bigotry.”

Carol Cruz, the vice president of College Republicans at Pierce College, brought her group to the protest to interact with and learn from the protesters.

“I think that it’s great that people are exercising their right to protest. But I do feel a bit concerned that a lot of (Shapiro’s) quotes are taken out of context,” Cruz said. “As someone who listens to all of Ben Shapiro’s podcasts, I can tell you there are a few words to those sentences that would change the meanings.”

Several individuals who said they supported Shapiro and wore “Make America Great Again” hats got in arguments with the protesters. Some also filmed protesters on their phones, and began chanting “show your face” when students said they did not want to appear on camera.

One individual asked the crowd of protesters if they did not like him because he is white after they yelled profanities at him. Some Shapiro supporters then told students to go back to their parents’ basements as student protesters began to leave Bruin Walk.

Arthur Schaper, a member of Los Angeles County for Trump, said he protested to stand up for free speech.

“I’m fed up with kids being indoctrinated with everything like cultural Marxism,” Schaper said. “(Students think) everything is bad, and people don’t have a right to speak.”

Several students and alumni said they participated in the protest because they did not agree with Shapiro’s views.

Teyahja Wysinger, a first-year business economics student, said the event made her feel unsafe on campus.

“I feel like I’m going to be targeted now from people that don’t even belong here,” she said. “UCLA should be a safe space for everyone.”

Daniel Phelan, a graduate student of structural earthquake engineering, said he thinks Shapiro’s views on LGBTQ individuals can endanger those individuals on campus.

“He is so vehemently against and spewing hatred of (LBGTQ) groups,” Phelan said.

Luna Hernandez, who graduated from UCLA in 2017, said she thinks students should protest against conservative views and speakers.

“I think it’s very right that students are out here protesting (against) someone who upholds white supremacy, ” she said.

Source: http://dailybruin.com/2017/11/13/bruin-republicans-event-sparks-protests-draws-conflicting-viewpoints/
Posted by California Policy Issues at 7:29 AM