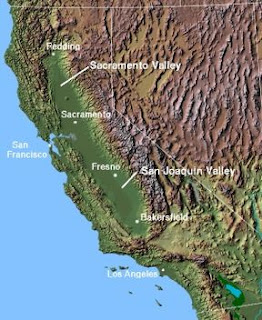 Complaints have been mounting concerning Gov. Brown's recent choice of new regents. One complaint has been the ignoring of the constitutional process of using an advisory committee.* Now there is a complaint that representation of the Central Valley is missing.

From the Fresno Bee:

For the first time in decades, no one from the San Joaquin Valley is serving on the University of California’s 26-seat governing board – perpetuating local concerns that some of the state’s neediest areas are not well-represented.

“This is another example of the governor essentially dismissing Central California as a flyover area,” said Assemblyman Jim Patterson, R-Fresno. “It’s inexplicable to me to have the region utterly ignored like this, with an appointment of this magnitude. It raises all kinds of questions about whether this region is really getting its due.”

Patterson plans to take the issue to the San Joaquin Valley Caucus – a bipartisan group of legislators formed in 2015 – and says that Gov. Jerry Brown would not neglect other big cities in such an appointment. None of the 18 governor-appointed members on the UC Board of Regents are Valley residents, with most based in the greater Los Angeles area. The other regents are ex officio members, which include the governor himself and the state superintendent of schools, plus a student representative...

Fred Ruiz, co-founder of Dinuba-based Ruiz Foods, was the last Valley representative on the board, but was not re-appointed when his term ended in 2016. While Ruiz, 73, said the decision was voluntary, he urged that another Valley resident be appointed – sending a list of about 20 potential candidates to Brown’s office this year.

But when Brown appointed four new members to the board on June 2, none were from the Valley...

“Regardless of where appointees were born – or currently live – we expect them to represent the entire state and its students,” said Evan Westrup, the spokesman for Brown.

Full story at:
http://www.fresnobee.com/news/local/education/article155956179.html
---
*http://uclafacultyassociation.blogspot.com/2017/06/jerry-rigged-regents.html
Posted by California Policy Issues at 10:21 AM