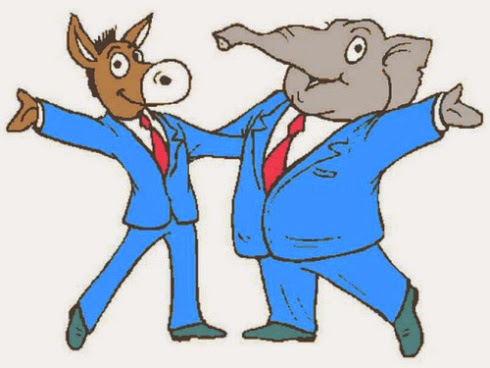 Maybe things are not so cooperative as the picture suggests. But the normally conservative-leading Fox & Hounds blog carries a statement by Republican Dick Ackerman and Democrat Mel Levine*:

...Gov. Brown said in his inaugural address that he does not want students to be the higher education system’s “default financiers.” But to avoid tuition and fee increases, the state must do its part. The governor emphasized that the higher education system “through real cooperation among its segments, can well provide what Californians need and desire.” That cooperation must extend to the governor and the Legislature...

The Governor’s preliminary Budget doesn’t address the critical need to adequately fund public higher education, but this proposal is just the beginning of the process.  The governor, Legislature and higher education community must come together over the next few months to reach a sustainable funding plan for UC, CSU and the community colleges. One positive development is that the Governor and UC President Janet Napolitano have embarked, as a committee of two appointed by the University’s Board of Regents, on a joint effort to develop recommendations on how the University can more efficiently and effectively address the issues of access and quality. This debate isn’t about one or two budget cycles, but rather about the role of institutions that are crucial to California economy and its identity as the world’s leading center of innovation and creativity...
---
Dick Ackerman and Mel Levine co-chair the California Coalition for Public Higher Education. Ackerman is a former California State Senator and Assemblyman, and Levine is a former U.S. Congressman and State Assemblyman. Full article at http://www.foxandhoundsdaily.com/2015/02/dont-sell-public-higher-education-short/
Posted by California Policy Issues at 4:08 PM