Maybe We Can Just Forget About Those Gifts

More than $5 million in scholarships and grants were distributed by the Donald T. Sterling Charitable Foundation at its year-end Charity Awards luncheon at Spago.

Singer Debby Boone provided the entertainment while Dr. Michael Beckwith and Rabbi  David Baron delivered stirring invocations before it was time for Beverly Hills-philanthropist and entrepreneur Donald Sterling to do the honors of presenting the grants to the representatives of 30 charities and eight high schools. 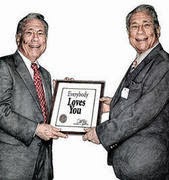 Mayor Jimmy Delshad was on hand to present Sterling, the foundation’s chairman, with a proclamation on behalf of the City.

PS: If you haven't looked at the news or turned on a radio in the last day or so, you can start with http://touch.latimes.com/#section/1780/article/p2p-80027664/ and then Google your way through the rest.

On the other hand, it may be hard to forget:

Sterling has been flying under the radar for a long time in regards to his racial views. He gives money to certain organizations but his lack of investment over the years to the Clippers speaks volumes of how he really feels towards his predominantly African American team.

People have the right to believe what they believe and to articulate these beliefs, especially in the privacy of their homes.