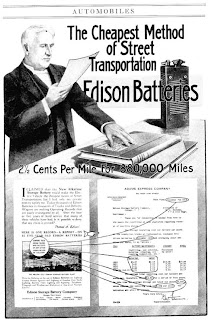 From KCET ...We told you that researchers at Ric Kamen's lab at UCLA had found a way to make a non-toxic, highly efficient energy storage medium out of pure carbon using absurdly simple technology. Today, we can report that the same team may well have found a way to make that process scale up to mass-production levels...  The recap: Graphene, a very simple carbon polymer, can be used as the basic component of a "supercapacitor" -- an electrical power storage device that charges far more rapidly than chemical batteries. Unlike other supercapacitors, though, graphene's sturcture also offers a high "energy density," -- it can hold a lot of electrons, meaning that it could conceivably rival or outperform batteries in the amount of charge it can hold. Kaner Lab researcher Maher El-Kady found a way to create sheets of graphene a single carbon atom thick by covering a plastic surface with graphite oxide solution and bombarding it with precisely controlled laser light.  English translation: He painted a DVD with a liquid carbon solution and stuck it into a standard-issue DVD burner. The result: Absurdly cheap graphene sheets one atom thick, which held a surprising amount of charge without further modification.


That work was reported a year ago; we mentioned it due to the video virally making the rounds this week. Late Tuesday, UCLA announced that El-Kady and Kaner have a new article in press, in the upcoming issue of Nature Communications, describing a method by which El-Kady's earlier, slightly homebrewed fabricating process shown in the video can be made more efficient, raising the possibility of mass production. As the authors say in their article abstract, More than 100 micro-supercapacitors can be produced on a single disc in 30 min or less...
Full story at http://www.kcet.org/news/rewire/science/more-good-news-on-those-carbon-supercapacitors.html

The UCLA announcement is at:
http://newsroom.ucla.edu/portal/ucla/ucla-researchers-develop-new-technique-243553.aspx

The video mentioned above can be seen below: