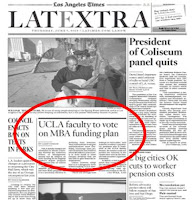 An earlier post today noted the interest of the LA Times in the Legislative Assembly's vote on whether to override the Graduate Council's decision rejecting the proposed MBA self sufficiency funding model.


Probably, the vote will be reported in the LA Times and the Bruin tomorrow.  But below is a message from the Anderson School dean announcing that the Legislative Assembly did override the Graduate Council 53-46:

To the UCLA Anderson community:

Today, the Legislative Assembly of the UCLA Academic Senate approved our proposal to convert the UCLA Anderson School of Management Full Time MBA program from state-supported to self-supporting. The vote was 53:46 in favor of the proposal. It now goes to the University of California system-wide Academic Senate and to UC President Mark Yudof for his final decision.

Let me be clear on what this proposal is. It is a change only in our financial model. The school remains an integral part of UCLA, as before, and a proud member of this great public university. However, the proposal provides financial and strategic advantages that benefit our students, our school and our university.

The vote by the Legislative Assembly, which includes approximately 120 elected representatives from academic units across campus, followed an exhaustive review by UCLA administration and faculty. More than 70 percent of UCLA Anderson's faculty supported the proposal, as did a majority of the school's Faculty Executive Committee. The proposal's finances were reviewed and endorsed by the Senate's Council on Planning and Budget. A majority of the Senate's Graduate Council voted against the proposal. Thirty-five UCLA Anderson faculty appealed that result, leading to today's vote by the Legislative Assembly. The proposal has the support of UCLA Chancellor Gene Block and Executive Vice Chancellor & Provost Scott Waugh.

The Full Time MBA program is the only Masters level program, among six at Anderson, that is currently state supported. As I've expressed all along, I believe this conversion to self-supporting status will benefit both Anderson and all of UCLA. It will bring greater predictability and stability to Anderson tuition rates and enable more efficient deployment of teaching resources across all of our MBA programs, thereby ensuring teaching innovation and excellence into the future. It will also allow us to moderate tuition increases, thus benefiting our students.

There are also clear financial benefits to UCLA. Under the proposal, state support that otherwise would flow to UCLA Anderson will instead be available to the campus for use in other programs hit hard by state budget cuts. The net financial gain to the campus is estimated at $8.8 million annually.


UCLA Anderson's affiliation with the campus will remain unchanged, and the school will be subject to the same academic and administrative governance policies and regulations as before. A small amount of public funding will remain to support the undergraduate accounting minor and a portion of the doctoral program.

Our proposal has raised some concerns within the UCLA community about the meaning of public higher education, and the public's commitment and ability to fund it. We respect those raising questions about our proposal and its ramifications. We are a university -- we thrive on discourse, disagreements and debates. We do that within an atmosphere of appreciation for our differences. Once a decision is made, we come together as colleagues and as part of this wonderful UC family.

It is now time to move forward. We await the final decision of President Yudof. Assuming he affirms the self-supporting proposal for the Full Time MBA program, we look forward to advancing innovative learning opportunities for our students, and the stature of our school.
I deeply appreciate your continued support as we protect the great engine of research and education that is UCLA.

UPDATE: The LA Times story contains the following info:
...UCLA Chancellor Gene Block said he was pleased with the vote. "The UCLA Anderson proposal would aid not only the professional school but the entire campus as we adjust to the loss of state funding," he said in a statement...
Full story at http://www.latimes.com/news/local/la-me-0608-ucla-20120608,0,4334259.story


UPDATE: The Sacramento Bee carries the story at:
http://www.sacbee.com/2012/06/07/4546185/ucla-faculty-votes-on-fiscal-plan.html  It contains:
...(A spokesperson for UCLA) noted that other public universities, including the University of Michigan and the University of Virginia, also have self-supporting business programs...

UPDATE: UCLA's media release on the vote is at:
http://newsroom.ucla.edu/portal/ucla/academic-senate-approves-ucla-234882.aspx


...In an interview shortly after the Academic Senate vote, its chair offered a different take. Asked if UCLA was letting the state off the hook, Andrew Leuchter, a professor of psychiatry and biobehavioral sciences, said, "The state has not seemed to need any encouragement or permission from us to disinvest in higher education. That process is ongoing. We need to adapt to it or to sacrifice the quality of our educational programs." He said that, to most faculty members at the University of California, sacrificing quality was a terrible option. He added that "we had to make some very difficult choices regarding the funding model going forward because of the massive disinvestment in public higher education."
The Academic Senate at UCLA meets behind closed doors, and votes are by secret ballot. Leuchter characterized the debate before the vote as "spirited."...
Full story at: http://www.insidehighered.com/news/2012/06/08/ucla-faculty-approves-plan-end-state-funds-mba-program

NICE BLOG!!! Education is the process of bringing desirable change into the behavior of human beings. It can also be defined as the “Process of imparting or acquiring knowledge or habits through instruction or study”. Thanks for sharing a nice information.
Top Animation institutes in Bangalore