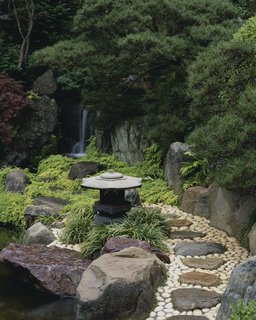 It is possible that the sale of the Japanese Garden by UCLA may come up at the forthcoming Regents meeting, at least in the public comment period.  The letter below was emailed to me by an individual who has been involved in the debate over the sale.  I should point out, in reprinting the email, that the UCLA Faculty Association has no position on the proposed sale but, as in other matters pertaining to UCLA, prefers that information on controversial matters be aired openly when possible.  The Japanese Garden matter affects not only the garden itself but also could have possible effects on future large donations to the university.

In the case of the email below, the text reflects the fact that Hannah Carter’s children have been opposed to the sale, at least as it is being conducted, but that Bill Carter thought that in view of the budget squeeze on UCLA, former Regent and donor Ed Carter would understand the need for revenue.

Awhile back I forwarded you my letter to Chancellor Block and also Vice-chancellor Scott Waugh's response. You may recall that I also was in correspondence with a friend, Bill Carter, Regent Carter's son, re the garden. Bill cc'd Block on his response to me and, subsequently, he was contacted by another Vice-chancellor, Rhea Turletaub, who, in a most "courtly" manner, asked his permission to use his letter in their dealings, which he granted.

I saw Bill recently and he says his letter was not intended to support either side but, instead, to point out that his dad was a practical man who worked for win-win solutions. He told me that he has no objections if I were to also forward his letter to you which I am now doing -- see pasted below.

I send this on for whatever help it may be, if only to in aid your readiness for argument, knowing what "the other side" has in its dossier.

I continue to believe that the rental of the house and/or the establishment of a scholarly/research oriented trust/institute run from and for the house, would pay for the garden. And that a for-fee shuttle run from UCLA would solve the garden visitor access problem.

All the best in your important efforts,
Strawn Rosenthal

Most interesting to read the Chancellor's reply.  And to note your strong emotional engagement in this issue.

Partly because I live far away physically and mentally, I see it all through a different lens.  Dad had long term objectives involving permanent values; these were expressed in (a) his paintings collection, founding work on LACMA, and gift of the collection to LACMA; and (b) his 36 years as a UC Regent, including a term as Chair and long term Chairman of the Finance Committee.
His other interests were marked by market-wise pragmatism.  Soon after he first moved into Siena Way, he donated the Japanese garden to UCLA because they wanted it, because he did not want the responsibility of maintaining it, and because he could get the charitable tax deduction.  He and Hannah liked having a key and being able to show it to guests now and then.

A typical decision of his, it seemed win-win at that time, which was nearly half a century ago.
He always believed in retaining working capital for ventures he understood and cared about, and real estate was not one of these. So, similarly, he donated the house to UCLA upon his death because he had believed his widow would then move back to the SF Bay Area.  That decision was made decades ago when the Chancellor did not have a suitable residence on or near the campus.  Hannah remained in the house for years and paid rent on it to UCLA before returning to the Bay Area in her dotage.  Contrary to her son's statement as quoted in the LA Times, yes she deeply enjoyed growing and trimming the flowers, but these were in the house property adjacent to the Japanese garden, not on the University property on the other side of that fence.
In the current budgetary crisis of California in general and UC in particular, the arguments for recouping $15 million into UCLA's coffers versus up-keeping the places would have been something Dad understood as head of the finance committee.  On the other hand, there is huge intangible value in the garden in particular, especially in the light of how nearby residents and members of the campus community, such as yourself, feel about the issue.  Here near Stanford, we are constantly privy to town-gown tensions of these sorts.
One of Dad's greatest gifts was his ability to work out win-win solutions fulfilling all parties' long term interests.  Perhaps he would have found a third way in this case.  He was in charge of UC finances during the great period of its expansion from 2 or 3 campuses to many times that.

Imagine the types of people with all their competing interests from faculty to Vietnam war protestors to Livermore and Los Alamos scientists to real estate and shopping center developers to coastal issues with Santa Cruz and Santa Barbara and UCSD/Scripps campuses to the semi-autonomous medical centers.  In our current vitriolic and narrow-agenda era we could use more like him.  But those were days when a few persons of vision had more clout State-wide.

---
Update: Yours truly has received an email from the "Coalition to Save the Hannah Carter Gardens" confirming that there will be family members and others speaking in the public comment session at the Regents on Thursday, Mar. 29. Regents meetings are live streamed (audio only).  However, I will be on an airplane at that time so if you are interested in hearing that session, you can either listen to the stream or await receipt of the audio files by the UCLA Faculty Assn.  The audio will then be posted on this blog.

The live stream will be at http://california.granicus.com/ViewPublisher.php?view_id=2 and the public comment session on Mar. 29 is at 8:30 AM.  If anyone wants to make a recording and send it to me, I can post it before we receive the audio file from the Regents:  daniel.j.b.mitchell@anderson.ucla.edu..
Posted by California Policy Issues at 2:14 PM