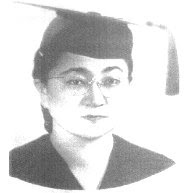 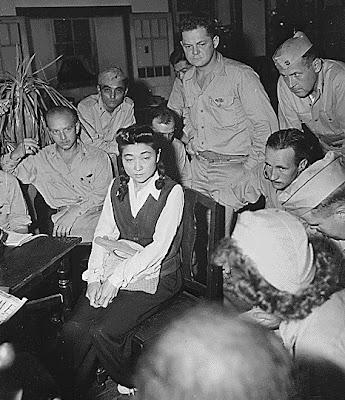 After World War II, a UCLA graduate was arrested as being "Tokyo Rose." She was convicted but later pardoned by President Gerald Ford. The story below:

The Painful Ordeal of Tokyo Rose

"L.A. Then And Now" section of the Los Angeles Times 5/24/98
by Cecilia Rasmussen

She was a soldier's seductress whose sexy taunts earned her imprisonment, loss of her U.S. citizenship, and, ultimately, the derisive nickname "Rose With Thorns."

Wronged by her country and the city of her birth, she was a victim of wartime passions who steadfastly maintained her innocence and eventually won America's apology.

Iva Ikuko Toguri was born on July 4, 1916, and raised in a predominantly white neighborhood on Wilmington Avenue in Compton. Unlike many Japanese Americans, she spoke very little Japanese. She attended Compton Junior College and graduated with a degree in zoology in June 1941.

A few weeks after graduation, her mother's sister in Japan was taken ill, and Toguri was chosen to represent the family at her bedside. She had never been to the country from which her family had emigrated, and had never met her aunt. Toguri's mother was also seriously ill, and would die the following year on her way to a U.S. internment camp.

Trapped in Japan by the outbreak of war with no money and classified as an enemy alien, Toguri was constantly harassed by the Japanese government.

The distrust their American relative engendered soon became intolerable to her aunt and uncle. Taunts by neighbors for harboring an enemy grew, and they asked her to leave.

She asked Japanese authorities to imprison her with other American nationals, but instead, she was forced to work on the English-language "Zero Hour" radio program, joining more than a dozen other English-speaking women who broadcast under the collective nickname Tokyo Rose. Toguri was the only civilian at Radio Tokyo who chose not to renounce her U.S. citizenship---and ironically, became the only Tokyo Rose arrested by U.S. authorities.

Befriending three POWs who had broadcast experience before their capture and were covertly subverting Japanese propaganda broadcasts, she risked her life for them, purchasing food, medicine and tobacco. These men would later travel long distances to defend her in court.

In 1945, Toguri converted to Catholicism, marrying Felipe d'Aquino, a Portuguese citizen of Japanese ancestry who worked at another radio station.

Calling herself "Orphan Ann," she came on the air with: "Hiya, keeds. I mean all you poor abandoned soldiers, sailors and Marines vacationing on those lovely tropical islands. Gets a little hot now and then, doesn't it? Well, remember, fellas, while you're sweating it out on the islands, your sweet little patootie back home is having a hotcha time with some friendly defense worker. They're probably dancing right now to this number...it used to be your song...remember?"

For war-weary soldiers and sailors, the broadcasts were a break in the boredom of war, and not to be taken seriously. Many officers believed Tokyo Rose strengthened the morale of the armed forces in the Pacific. In jest, they even gave her a citation after the war. The American government wasn't as tolerant, and imprisoned Toguri in Japan for 12 months at war's end on charges of treason.

But an exhaustive investigation by the Army, FBI and the Justice Department failed to substantiate the charges, and Toguri was released. The case appeared closed and her life temporarily returned to normal, until she became pregnant and tried to return to Los Angeles.

Walter Winchell, the red-baiting columnist who could destroy politicians and create millionaires, vigorously campaigned against her. The American Legion and the Native Sons and Daughters of the Golden West issued strong protests, and the Los Angeles City Council passed a resolution opposing her return on the curious basis that she might adversely influence "loyal" Japanese Americans.

The public outcry delayed her return, and her baby died at birth. She was again arrested and brought to San Francisco, where a federal grand jury convened to investigate her for treason. The grand jury asked why other Americans working at Tokyo Radio were not similarly charged, and the prosecution promised that the others would be. On that basis, the grand jury handed up an eight-count indictment against Toguri. (The prosecution's promise was never kept.)

In 1949, when the trial jury deadlocked after a 56-day trial, the judge refused the juror's request for dismissal, pointing out that the trial had been "long and expensive."

The jury returned two days later, finding Toguri guilty of one count. Her offense boiled down to a single sentence: "Orphans of the Pacific, you are really orphans now. How will you get home now that your ships are sunk?"

Her attorneys argued that this statement was not intended seriously and could not possible have been taken that way, since the Allies had just won a major sea victory.

Stripped of her American citizenship, she was sentenced to 10 years in prison and fined $10,000. Toguri said goodbye to her husband, who had been forced to sign a statement saying he would never try to enter the U.S. again.

Over the next three years, the Supreme Court rejected Toguri's appeals for review. Her supporters pointed out that there were no nonwhites on the jury and evidence was missing. They also alleged that witnesses had been bribed and threatened.

Upon her release in 1956, the Justice Department came after her, demanding payment of the $10,000 fine. It was paid in full from her father's estate when he died in 1972.

In the early 1970s, a new generation of journalists began to reexamine her case. A campaign grew, contending that Toguri had been the victim of racism and wartime hysteria.

Twenty-seven years after her conviction, two witnesses who testified against her admitted they had been coached by the prosecutor and had testified under extreme duress. In 1977, President Gerald R. Ford granted her full and unconditional pardon and the nation's apologies. It was the first time in American history that such a pardon had been given after a treason conviction.