Where the Money Is? 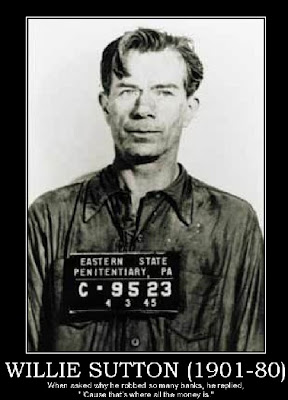 From the Merced Sun-Star comes a reminder of Willie Sutton who said he robbed banks because "that's where the money is."

University of California at Merced Chancellor Dorothy Leland came to learn, not lecture, this week on Capitol Hill. It's crucial terrain, after all, that could prove critical to her success with the 6-year-old university. "This is not a visit in which I've come with a specific request," Leland said Wednesday, amid the hubbub of the Longworth House Office Building cafeteria. "It's important for me to form relationships."

…The first UC Merced chancellor, the late Carol Tomlinson-Keasey, regularly traveled to Washington, placing considerable focus on issues such as securing wetlands development permits from the Army Corps of Engineers. Leland, too, has growth on her mind. "We're going to have to break some logjams, if we want to develop in the future," Leland said.

Instead of wetlands permits, though, Leland suggested that she might be looking for federal tax provisions or other assistance. She cited, for instance a "new markets tax credit" bill backed by Costa, Cardoza and Rep. Jeff Denham, R-Atwater, which could aid the university as it expands.

Leland will be adding her voice, and her uniquely tailored Merced message, to the robust D.C. lobbying presence maintained by the University of California. The university reported spending $700,000 on federal lobbying last year, records show.