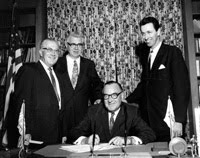 UC tuition no longer a bargain

Fed up with indecision and drift, the University of California is serving notice: Barring a miracle, tuition could nearly double over the next four years to more than $22,000. Don't anyone miss the point: California's finances and political priorities don't favor higher education. That means the vaunted university system needs to fend for itself by asking students and their families to fill the gaps left by indifferent Sacramento. UC is at a tipping point… What's under way is a shift in the university's mission and character. It was conceived as a public-serving institution under a master plan that ensured admittance to a wide range of students, not an elite. Rising costs and financial uncertainty now belie this commitment.

At the same time, the university isn't immune from the real world. UC has undercut its image by doling out six-figure salaries while turning deaf to public outcries. Also, California's overall finances remain weak, making a loss in state support inevitable…

More revenue must be found, but there are too few ideas at hand. Sacramento is all about cuts, not strategic thinking, debate or leadership. Left on its own, the university has few options aside from taking it out on its faculty, staff and students. California will suffer unless a better way is devised.