Cash Coming to State, At Least in the Short Run 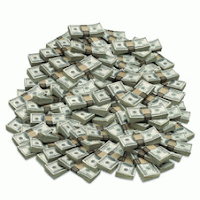 Given the state's ongoing budget problems, why aren't IOUs (Registered Warrants) on the horizon? Basically, the state has taken steps to deal with its cash needs, at least in the short run. Some of what it has done has been to delay payments. In effect, it has tried to coordinate its seasonal inflows of cash - some of which comes to funds outside the General Fund - with its spending. Once a budget was passed, albeit very late, that made it easier for the state to borrow short-term. Thus, the state is about to offer Revenue Anticipation Notes (RANs) to the tune of $10 billion. These notes are securities that mature within the fiscal year, i.e., by June 30, 2011.

You can actually loan money to the state (buy RANs which are tax exempt), as this radio ad indicates: