Where Is the State Budget? 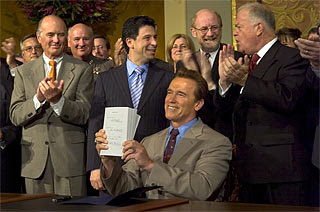 The picture on the left is from happier times in 2006 when a state budget was being signed. But there is no evidence that we are going to see anything like that in the next few days. The Sacramento Bee today has a brief summary of Democratic vs. Republican current positions on the budget at:

Exactly where the governor is on all this is unclear. Of late, the governor has been talking about needing various reforms - not necessarily related to the immediate budget - as part of the deal. One of these is public pension reform. The governor has signed contracts with various state unions which raise employee contributions to their pensions - which does not seem like a major structural change. There is, however, a 2-tier element, although the lower-tier is still defined-benefit, not the defined contribution plan conservatives want. But these contracts have been trumpeted by the governor as moves in the right direction. If that is all he wants, there would not be a big stumbling block to a budget deal stemming from the pension area. But at other times he has spoken of two-tier pension type changes.

The governor has also cited some kind of rainy-day fund as a needed reform. In fact, the general fund has always had a reserve. When the governor and the legislature put Props 57 and 58 on the ballot in 2004 - part of the budget fix of that era - there was an additional reserve created. But as more recent events show, it is hard to enforce such saving when the money runs out. To create a third reserve, or to fiddle with the reserve created by voters in 2004, you would need a constitutional amendment. There is no way at this point that such an amendment could be put before voters before the governor leaves office in early 2011. Of course, the legislature could agree to put some kind of amendment on the ballot in the future, after he departs. Maybe the governor would consider that sufficient - who knows?

Note that as far as a gubernatorial legacy is concerned, aspects of what the governor would like to leave are in the hands of voters in November. There is an initiative which would suspend the state's greenhouse gas law, AB 32. The governor considers AB 32 part of his legacy. It brought him national and international recognition - including a speech at the UN - as an environmentalist. So he is opposing the initiative and has recruited George Shultz to lead the charge. He also favored taking redistricting out of the hands of the legislature and an initiative was passed in 2008 doing just that. But on the November ballot there is an initiative to repeal the 2008 proposition - which the governor obviously opposes. In both of these legacy-related matters, however, there is no way to condition a budget deal on them. Voters will decide; not the legislature.

Meanwhile, the Democrats' plan would require a 2/3 vote in part. Among other items, they have a program which raises certain taxes, including the income tax, that are deductible from federal income tax. In their calculation, taxpayers would come out ahead due to the deduction. Problem is that the LAO says middle-income taxpayers would net come out behind. Even if it could be shown that every tax bracket benefited from the plan, the 2/3 vote remains an obstacle. There is another Democratic plan involving an oil severance tax, borrowing, etc., which has been claimed to avoid the 2/3 requirement. But there are legal questions about the plan and no one will lend money to the state based on a plan that could go poof.

In a recent speech to a Hispanic business group, the governor said that a deal might be reached by the end of August. (You can hear the speech - which also includes remarks about wanting reforms of pensions and a rainy-day fund by going to http://www.gov.ca.gov/multimedia and clicking on the video for Aug. 13, 2011.) The solution is somewhere in the future http://www.youtube.com/watch?v=QhzbzwPNgXA but whether it is the next 2 weeks (the end of August) is unclear.
Posted by California Policy Issues at 7:48 AM