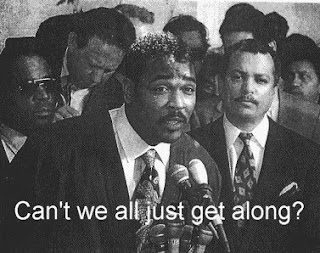 Legislative Democrats produced their own budget proposals yesterday, although Republicans and the governor have said they are not acceptable. There is an oil severance tax, done in a complicated way in an attempt to avoid the 2/3 vote requirement for taxes (from Prop 13 of 1978). It appears to be legally dubious. There is an increase in the state income tax and the vehicle license fee with a cut in the sales tax. The net at the state level is a tax increase which would require a 2/3 vote. It has a carrot for Republicans because the state income tax and VLF are deductible from federal income taxes and the state sales tax is not deductible. Thus, the net at the state+federal level is calculated to be positive for the state. Even so, however, GOP votes would be needed to get the required 2/3. And Republicans have noted that the net effect on individual taxpayers will vary depending on their deductions, consumption, etc. Bottom line is that there is still a budget stalemate.

You can read the Democratic proposals at:

Links at that site will give more detail.
Posted by California Policy Issues at 7:50 AM