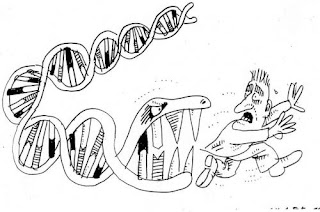 Below is an excerpt from a Sacramento Bee article describing a legislative hearing over a UC-Berkeley freshmen orientation program which involved voluntary DNA testing.

"Two UC Berkeley professors Tuesday defended a controversial plan to perform genetic testing on incoming freshmen during a legislative hearing that also featured testimony from privacy experts and bioethicists blasting the plan. Lawmakers asked questions about the Bring Your Genes to Cal project, but ultimately have no authority over the University of California.

Whether the project moves forward likely depends on the outcome of a meeting today between UC Berkeley officials and representatives of the state Department of Public Health, campus spokesman Robert Sanders said in an interview after the meeting. If the state Department of Public Health rules that UC Berkeley's project amounts to medical testing, the university would have to have students' saliva tested in a specially designated laboratory. The university argues that it is performing research – not medical tests – which would allow testing at a greater variety of labs.

Because of the relatively small scope of the tests, UC Berkeley hasn't been able to find the specific type of lab willing to do the tests if they are deemed medical diagnosis, Sanders said. The campus may end up not testing the saliva samples it has gathered, he said, or may test them but not give the results to students. A decision will be made later this week."

Whatever the issues are here, no one at the hearing asked the question of whether the content of a freshmen orientation program at Berkeley is the most important question involving public higher ed in California that the Assembly Higher Education Committee could be studying. Isn't this hearing an exercise in micro-management when there are macro-size fiscal issues for UC the Committee ought to be resolving? Just asking.

--
UPDATE: The state Dept. of Public Health has ordered UC-Berkeley not to release individual info to students. More details at http://www.sacbee.com/2010/08/13/2955986/california-officials-make-cal.html

UPDATE: You can view the hearing at the calchannel website url below starting at minute 10: