A Bit of UCLA History from the 1964 Commencement 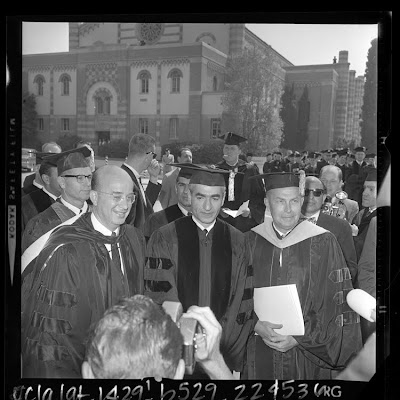 The official Los Angeles Times caption on this June 12, 1964 photo in the UCLA Digital Collection is "SHAH RECEIVES DEGREE - Mohammed Reza Pahlavi, the shah of Iran, center, stands with Dr. Clark Kerr, left, president of UC and Chancellor Franklin D. Murphy after being presented an honorary degree of Doctor of Humane Letters."

Actually, the event was more tumultuous than the caption suggests. In an earlier post, I noted that Jim Klain gave a talk about the history of Royce Hall on August 11. Klain was in charge of campus events, not just Royce Hall. In response to a question about the most difficult event he could remember, he spoke of the granting of an honorary degree to the Shah of Iran. There were students from Iran protesting and an airplane overhead pulling an anti-Shah sign.
Posted by California Policy Issues at 4:40 PM